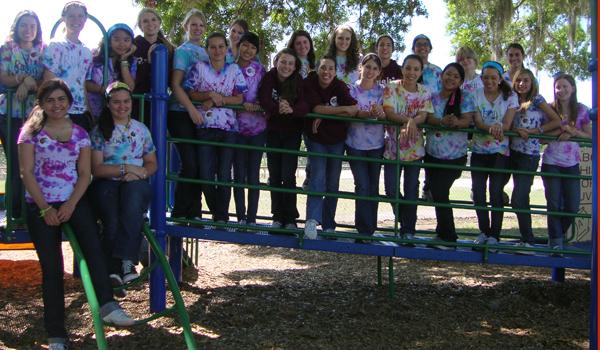 On Sunday night, March 20, twenty-four Academy missionaries and four leaders loaded hundreds of shoes into vans and made the 40-minute drive to Ruskin Florida.  The girls, led by student leaders Lindsey Backman, Taylor Trayner, Annie Swanson, Felicia Nelson, and Sabrina Marcos and  teachers Ms. Judy Perella, Ms. Maureen Finley,  Ms. Stephanie Rotolo, and parent Mrs. Edie Backman arrived later that night at Camp Dorothy Thomas, which would serve as home for the week.  The girls fell asleep that night to creaky bunk beds and mixed emotions of excitement and nervousness towards the week ahead of them.

This year’s trip began a little differently.  In past years, the girls started the week at Ruskin Elementary school, an underfunded school that many of Florida’s migrant workers’ children attend.  This year, the school was closed Monday so the entire group traveled to Palmetto to clean and paint a RCMA center.  RCMA centers or Ruskin Christian Migrant Association centers serve as daycare centers for the migrant workers’ children and are located throughout Florida.

For the rest of the week, the girls began the day at Ruskin Elementary, where two girls were assigned to a kindergarten classroom to help the teacher with individual students needs. The girls help many Hispanic students struggling to learn English or kids struggling with math such as 1+1 or 5+8.  By the end of the week the girls helped their students come a step closer to moving onto the next grade level, as the kindergarten last year held back about one-third of their students.

Though the girls were able to make a difference in their students’ academics, many served as confidantes for the children, whose identities were not disclosed to the girls to protect both child and family.  These students told tragic stories of watching a parent die or of enduring abusive or neglecting parents or other traumatic home environments.  The girls learned quickly that most of the kids simply needed someone who would listen and pay attention to them, someone who would give them the love they craved but that they were not receiving at home.

It became harder to leave the classes at the end of the day but the missionaries’ day was not over yet.  The girls divided into groups and went to RCMAs around the Ruskin area.  Their tasks included cleaning, painting, raking, and even carrying cinderblocks.

The girls were exhausted by the time the returned to the Ladybug Cabin at Camp Dorothy Thomas every day, but there was always time for a little bit of fun.  Each night ended with an activity such as bracelet making and a scavenger hunt around the camp grounds.  Ms. Perella even taught the team how to weave sit-upons for around the camp fire.

At the end of the week, every missionary made cards for her class and was forced to say good bye to the kids they had grown to know and love.  They once again piled back into the vans, most sleeping contently as they drove back toward Tampa and all comforted by the fact that “their kids” are not even an hour away.