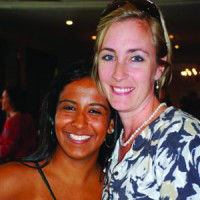 Academy junior Ana Herbst was selected as one of 10 Young Women of Promise by the Athena Society. Initiated in 1981, the program honors high school juniors what have demonstrated outstanding leadership in their community and show promise of making extraordinary contributions to their communities in the future. The Athena Society, an organization of Tampa Bay professional women,  has committed its mission to promoting equality and opportunity for women

Ana was nominated for the award by guidance counselors Mrs. Darcy Dwyer and Mrs. Debbie Lubrano. Mrs. Dwyer said of Ana, “[she] is well-balanced, funny, attentive and respectful. Academically, she has excelled, taking a rigorous course of study including honors and AP courses. I nominated Ana Herbst with great enthusiasm and utmost confidence in who she is and who she’s become.”

According to Lenora Lake in an April 13  feature on the Athena award, Central Tampa News and Tribune,  Herbst epitomizes  talent and success in alll that she endeavors, whether as a member of the swim team, swim instructor, life guard or member of the Teen Leadership Club. “She hopes to become a physician and someday volunteer to help provide medical care at the Children’s Home, which played a significant role in her adoption as a foster child.”