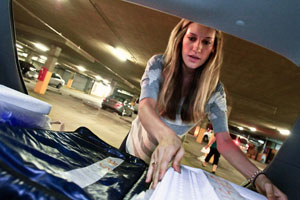 LOS ANGELES — Emma Thalken’s best friend is spending August in Ghana, where she will tour the country and do some volunteer work. If all goes well, it will be a life-changing, eye-opening experience. Thalken is spending her summer volunteering with the Hollywood Senior Multipurpose Center 10 minutes from her parents’ Hancock Park, Los Angeles, home.

Both of them could use their summer experience to write a compelling essay as they try to find their way to the college of their dreams. But perhaps surprisingly, college admissions officials say the senior center experience is just as valuable — and maybe more so — than the exotic trip to Africa.

“I’ve had other friends that have gone, but for me I just wanted to stay and help people in my neighborhood that needed help,” said Thalken, who has been volunteering with Assisteens, the teen arm of the Assistance League, for three years.

“There is never any reason to ship off to do volunteer work,” said Michelle Hernandez, author of “A Is for Admission” and founder of Hernandez College Consulting, currently based in Vermont. “And if you have to pay to volunteer, it doesn’t count. You should look locally.”

It’s a message that upper middle-class parents have started to internalize. Over the last decade, increased competition for choice college spots has spawned an industry of international travel with a volunteer bent and a hefty price tag for high school sophomores and juniors. But as doing reforestation in Costa Rica becomes more cliche than cool, some families are starting to think that paying for an amazing summer experience won’t give their child the edge.

This should come as a relief to parents who don’t have the cash to pay for expensive trips, and for kids who need to work during the summer.

Colleen Gold, whose twin daughters will be seniors this fall at two of L.A.’s most prestigious high schools — Marlborough and Harvard-Westlake — said both girls were told by their college advisers that volunteering at home would be more impressive to colleges than volunteering abroad. “I still know a lot of people that do it,” Gold said, “but we were told that to some colleges it looks like an excuse for an exotic vacation.”

Nancy Forman, who runs the West Coast office for Camp Experts and Teen Summers, a company that helps place kids in summer programs, said she’s seen a dramatic drop in the number of parents willing to pay $5,000 to $7,000 to send a teenager to do far-off volunteer work. Part of that is the economy, she said, and part of it is a growing realization that a few weeks of work with elephants in Thailand doesn’t mean admission to Yale.

Greg McKinnon, director of college counseling at the Sage Hill School in Long Beach, Calif., and the president of the Western Association for College Admissions Counseling, said there can be a place for elaborate and expensive volunteer trips on a college application. “Like everything with admissions, if it feels organic to the kids and is explored in other ways in their life, then it is one more affirmation that this is what they are passionate about,” he said.

Still, he rarely encourages it: “I’ve had lots of kids who’ve done it, and it opens their eyes, but it’s not a golden ticket.”

But parents, be forewarned: Just as the era of the elaborate community service trip has lost its luster, a new trend is raising its head: teenage-run nonprofits.

Brian Hawkins, a marketing consultant for Kids Korps USA, a San Diego-based organization that pairs kids with volunteer projects, said he’s hearing from his teens that simply volunteering is no longer enough — now they have to show colleges that they surveyed a community, assessed its needs, and created an organization to help serve those needs.

“We are finding that the private high schools and colleges want the kids to be able to show they are learning entrepreneurial skills,” he said. “So, a lot of our teens will say, we really need to develop our own projects.”

Seventeen-year-old Ashley Howard, who lives in San Diego and works with Kids Korps, is one of the kids hoping to start her own charity next year. Like Thalken, she plans to deliver food to seniors who can’t make it to the food bank. Howard isn’t sure yet how many people she will help, but she’s imagining around 100 to start off. The plan is to create a volunteer club at school, and grow the charity from there, ideally into a nonprofit.

If Howard pulls it off, she will leave high school having conceived of and run a successful charity, but Hernandez still insists that volunteering is enough.

“I’m seeing teens starting nonprofits left and right,” she said. “It wasn’t enough to just do volunteer work, so now all these corporate parents are helping their kids incorporate.”

She says Thalken, with her good old-fashioned volunteering, is on the right track.

“The main thing to keep in mind is to be sincere and spend your summer doing things for the right reasons,” she said.