Reach for the stars 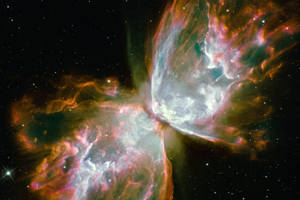 Walk through the halls of UC Irvine’s astronomy wing after dinner on a weeknight and you will find roomfuls of young graduate students, crammed into small desks, solving equations, writing computer code and developing innovative ways to analyze data. They do not have to be here.

These are people with career options. They are scary-smart, creative and hardworking. Yet they have come here from all over the country and the world to sit in windowless offices and make a fifth of the money they could make back home or up the street. Why? They want to unlock the universe.

The United States is still the scientific light of the world. Ours is the society responsible for discovering humanity’s place in the universe, that we live in a galaxy called the Milky Way, one among billions of other galaxies stretched across the cosmic landscape. A hundred thousand years from now, if humans make it that long, the U.S. will be remembered for this, and historians will point to the immense contribution of the Hubble Space Telescope, with its miraculous visible-light images, the most detailed pictures of the cosmos yet produced by humankind.

Sadly, U.S. scientific leadership is beginning to fade. There is a sense of fear among our leaders that we can’t afford to invest in our future, just the kind of fear that endangers thoughtful debate about big-picture priorities.

One testament to our changing priorities is our commitment to the Hubble telescope as compared to its successor. The Hubble is, in every way, a monument to scientific exploration. Thanks to the Hubble, orbiting 350 miles overhead, we know that the universe began just under 14 billion years ago. The age of the cosmos, once believed to be unknowable, is now available at the click of a mouse and has made it into schoolbooks in all 50 states. Astronomers have used the Hubble to determine the chemical makeup of planets that orbit distant stars and to discover dark energy, a mysterious substance propelling the universe to expand at an accelerating rate.

Many of the graduate students filling astronomy departments at University of California campuses, as well as Caltech and Stanford, have come to the state to explore and analyze terabytes of Hubble data. These data involve complex digital images, created in raw form onboard the orbiting telescope, and then decomposed into precise component colors. The Hubble beams this information to receivers around the world, where it is processed and made available for download. A graduate student working in Irvine can transfer Hubble images to a computer and then develop software to process and analyze the images’ meaning.

The goal is to squeeze information out of the gathered light that will help us discern the size, structure and chemical composition of objects that are almost always too far away for humans to ever hope to visit. The people who do this work are both creative and technically gifted. They must take what the universe provides — a shred of light collected by the Hubble — and discern implication from its signal.

We want these intelligent, dedicated people to live in our cities, to make their discoveries at our universities and to raise their families — the next generation of bright minds — right here. But without a replacement for the Hubble, these bright minds may well migrate to China, where funding for astronomy is rising steadily.

The Hubble is near the end of its life, and it will soon fall from the sky. In July, a House Appropriations subcommittee voted to kill its successor, the James Webb Space Telescope. The full House could well rubber-stamp the recommendation. This fall, the Senate will weigh in. We need the public to speak out to members of Congress. Losing the Webb telescope would be a travesty for U.S. astronomy.

The Webb would be 100 times more powerful than the Hubble, capable of studying other solar systems for signs of life and surveying the most distant galaxies in the universe. The loss of the Webb telescope would not only rob humanity of the opportunity to search for life on other worlds, but it would also waste the $3.5 billion already invested in its development and years of hard work by hundreds of people across the country. Many of those workers are here in Southern California at the Jet Propulsion Laboratory in La Canada Flintridge and Northrop Grumman Aerospace Systems in Redondo Beach, which is the prime contractor for the telescope.

More than three-quarters of the hardware is either complete or in production, and most of the technical obstacles have been solved. What is now needed is funding to finish building the observatory and send it to the launchpad so it can begin its mission. The U.S. is poised to do something hard, something unimagined by our ancestors; it will take courage to make it happen.

The price tag is large, but it needs to be viewed in context. Money invested in the Webb telescope creates jobs: master welders, electrical engineers and young astronomers. Though some of these jobs are of the hard-hat variety, this is not a bridge to nowhere; this is a bridge to the edge of the universe itself.