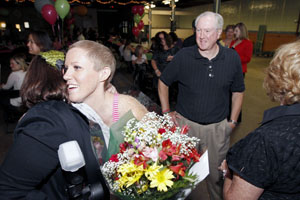 Meghan Malley, 29, a physical therapist from Berkley, Mich., wants her name on that list.

She’s networking, rallying and blogging publicly about her disease to bring attention to the times when breast cancer isn’t a lump. For about five percent to 10 percent of breast cancers, the warning signs may be a change in the feel of the breast or breast skin that becomes dimpled, puckered or reddened.

“I want women to know that breast cancer doesn’t always begin with a lump,” said Malley, whose hair has grown back pixie-cute after chemotherapy. “I want people to be aware that unfortunately you’re never too young to get breast cancer.”

During a monthly self-breast exam in January 2010, Malley sensed something different about her right breast. She had experienced some jolts of pain in the breast, and felt a denseness, almost a change in its weight. After an ultrasound and mammogram, doctors said she had fibrocystic breasts, which can make breasts painful and lumpy in response to women’s changing hormones, but isn’t cancerous.

A little over a year later, Malley was undergoing fertility treatments. She still was concerned about the changes she felt in her right
breast and pressed her doctor for additional testing. She had an ultrasound, which showed distinct changes, but doctors thought it might be related to the hormones she was receiving for fertility treatments. But to be sure, she underwent a biopsy.

On March 23 — two days after her 29th birthday — she learned that she had invasive lobular breast cancer, which occurs in about 5 percent of breast cancer patients. She started chemotherapy one day after she learned additional tests had detected cancerous spots on her spine, making it a Stage 4 — the deadliest of cancer diagnoses.

“There’s a lot of misconceptions about metastatic disease. They look at you like you’re going to die any day,” said Malley. “And although it’s scary, I feel that with more research and more funding, we can live a long time and live very fulfilling lives.”

Invasive lobular breast cancer forms in the milk-producing glands and causes an area of thickening in parts of the breasts, or sensations of fullness or swelling. It may also make the skin over the breast dimple or thicken.

Malley will have a double mastectomy at Beaumont Hospital in Royal Oak, Mich., later this month after undergoing 15 rounds of chemotherapy to shrink the cancer in her right breast and take out the spots on her spine.

The survival rate for women diagnosed with Stage 4 breast cancer is about 23 percent after five years.

“She’s gotten an excellent response in her treatment and her cancer is in remission,” said Flaherty. “And based on that, her outlook is certainly a more favorable one. I have people in my practice who are five and 10 years and more years out with that stage of the disease.”

Flaherty says Malley may be a candidate for clinical trials of new drugs down the road. In 2010, about 27 percent of breast cancer patients at Karmanos participated in some 30 clinical trials involving drugs and other research.

“We try to steer people into getting those opportunities when it makes good sense to do that in their care,” he said.

Malley has chosen to undergo a double-mastectomy and reconstruction, a choice she elected although no cancer has been found in her left breast. She will take tamoxifen, a drug that inhibits estrogen’s impact on breast tissue, for at least the next five years.

“For my own peace of mind, I wanted them gone. It was a very, very personal decision,” said Malley, acknowledging that other women in her position might choose otherwise. “Many women could do the chemo, the radiation and the hormone therapy and see what happens. For me, I just wanted the original site gone.”

Because medical protocol doesn’t require regular screenings of young women for breast cancer, delays in diagnosing can be a problem. Some medical providers may brush away patients’ concerns about breast cancer because of their youth. Also, it is more difficult to detect abnormalities in the breasts of younger women because their tissue is denser.

“The issues are so different when you’re young,” said Hardy. “As much as family and friends love and care for you and support you in every way, they don’t really get it in the same way as the others with cancer get it.”

“The quality of their life is better. They have less side effects. They share a lot of practical information, feel less alone, feel less
frightened,” Hardy said.

Hardy counsels her Stage 4 patients to think of the diagnosis as a chronic illness rather than a death sentence.

“The encouraging thing is that over the last five or 10 years is that many new therapies have entered the field,” said Flaherty. “We hope to see many in the next five or 10 years to personalize therapy better and for outcomes that are more favorable, even when they start out in an unfavorable circumstance.”

Here’s a look at some of the different types of breast cancer and their prevalence.

Medullary carcinoma: Most often found in women in their late 40s and 50s, it accounts for 15 percent of breast cancers. It gets its name because the lesions resemble the medulla — or gray matter — of the brain.

Infiltrating lobular carcinoma: This can cause a subtle thickening or dimpling in the outer appearance of the breast. It also may make breasts feel denser. It accounts for about 5 percent of breast cancers.

Tubular carcinoma: Usually found in women ages 50 and above, this cancer has a notable tubular shape. It accounts for about 2 percent of breast cancers.

Paget disease of the nipple: The skin of nipple and areola becomes crusty and red and may bleed; it occurs in about 1 percent of breast cancer cases.