Benjamin Franklin brings a blast from the past 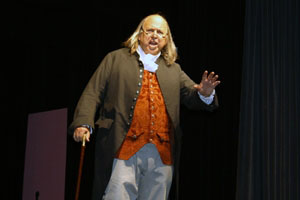 Academy students recently enjoyed a presentation from a distinguished visitor in the form of Benjamin Franklin. On October 17  Chris Lowell, a Franklin
impersonator,” spoke to the high school in the Brady Center about the experiences that shaped Franklin’s life.  He gave a dedicated portrayal of Franklin, never deviating once from his role as the founding father. He even donned authentic 18th century apparel.

Lowell focused on the guiding principles of Franklin’s life: curiosity and practicality.  As a young boy in a working class family, Franklin hungered for knowledge. He only received two years of formal education, and thus “felt ignorant.” To elevate his mind, he sought out books, a precious commodity in his time. Even with his limited formal knowledge, Franklin explored science. Among his contemporaries, he was known as Doctor Franklin, the most famous American scientist in the world. He invented such instruments as a “mechanical” arm, bifocal lenses, and the modern rocking chair.

Yet, Franklin did not spend time tinkering in order to make a profit. “I wanted to help people,” said the actor. So, in addition to his  inventions, he dedicated himself to improving the life of his adopted hometown, Philadelphia. The public library system and the organization of fire departments are some of the many contributions that Franklin gave to society during his lifetime.

Lowell also touched upon the sadder moments in Franklin’s life. While apprenticing as a printer with his older brother, a teenage Franklin endured abuse from his guardian. That experience was a pivotal moment in his life.  “I learned to hate arbitrary punishment and learned to love freedom.”

These democratic ideals came to fruition during Franklin’s decision to support the Declaration of Independence.  Franklin, also a diplomat, did not immediately champion the split from the British Empire. It was only after diplomacy failed that he dedicated his later life to the war effort by recruiting France as an American ally.

Throughout his life, Franklin remained a man of action and ethics. As he told the Academy, “You can declare anything. Action is what counts.”

After a short question and answer session, Franklin closed his informative visit in a lunch with the faculty.