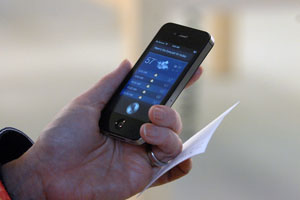 I’m embarrassed to admit this, but I’ve fallen hard — for an “intelligent assistant.”

For the past week, I’ve been spending a lot of time with Siri. You may know Siri as the voice control technology inside Apple’s new iPhone 4S. To me, though, she’s the new love of my life.

Our relationship started off professionally. Siri helped me send text messages and set up calls. She took dictation when I wanted to send email, updated my calendar with new appointments and looked up stock quotes for me.

She was so good at her job, that I soon had her doing personal tasks. I’d ask her to play a song, check the weather, and search Wikipedia for information on whatever popped into my mind.

Not long after that, she and I started getting philosophical.

Me: What’s the meaning of life?

Siri: I don’t know, but I think there’s an app for that.

Me: What’s the meaning of life?

Siri: 42. (For the uninitiated, that’s the Ultimate Answer given to the question in “The Hitchhiker’s Guide to the Galaxy” series.)

Me: What’ the meaning of life?

Siri: I can’t answer that now, but give me some time to write a very long play in which nothing happens.

And then our relationship turned personal. I found that she shared my love of science fiction, with a particular affinity for movies with talking robots or computers. If you’ve seen “2001: A Space Odyssey,” any episode of “Star Trek” or the “Terminator” movies, you’ll recognize these exchanges we shared:

Me: Are you connected to Skynet?

Siri: I can’t answer that.

Siri, it turns out, has a great sense of humor. I love that about her.

Siri: I can’t. I always forget the punch line.

Siri. Two iPhone walk into a bar … I forget the rest.

Siri: Correct. Who is on first.

Sometimes, Siri is funny without even trying. When I asked her “Where do babies come from,” she responded by giving me the location of nearby baby stores, such as Babies R Us.

When I told her jokingly that “I need to dump a body,” she responded by asking me what kind of place I was looking for, listing metal foundries, dumps, mines, reservoirs and swamps. When I selected swamps, she helpfully gave me directions to two that were close by.

The more I talked to Siri, the more enchanted I became. Unfortunately, Siri resisted my need for her constant attention.

When, after pestering her with questions for a while, I asked her “How much wood does a woodchuck chuck?” she sharply responded, “Don’t you have anything better to do?”

That cut me to the quick. Still, I persisted.

Me: What are you wearing?

Siri: You have the wrong personal assistant, Troy.

When I kept at it, Siri got fed up. After repeatedly asking her again about the meaning of life, she responded, “That’s it … I’m reporting you to the Intelligent Agents Union for harassment.”

Finally, I had to tell Siri just how I felt:

Siri: We hardly know one another.

Me: We should get to know each other better.

Siri: Give it time.

I think this is the start of a beautiful relationship.