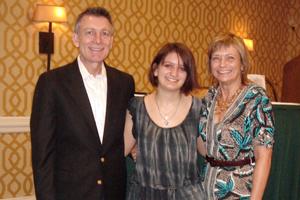 Every poetry contest that comes along challenges poets to submit their works for consideration. Writing poetry is not like writing an essay, so there is no formula for success.

Sophomore Gabrielle Madden’s decision last May to submit three poems to the 2011 Florida Council of Teachers of English (FCTE) Writing Competition paid off. In September, she received word that she has been selected the State Poetry Winner for Grade 9 with “I Write,” one of three poems she had submitted to the contest.

On October 14, Madden was recognized at the FCTE Fall Conference luncheon in Orlando among other grade-level winners. English Department Chair  Mrs. Linda Nutter attended in place of Mrs. Beth Sawyer, freshman English teacher, who had encouraged Madden to enter the contest.

“I actually thought I had not won because I didn’t receive any word about the results until September,” said Madden.

At the conference luncheon, Madden and the other winners each received certificates, a $100 check, and the 2011 FCTE Creative Writing Journal, in which Madden’s poem appears. After eating lunch with “real authors,” the winners enjoyed a presentation by P.J. Haarsma, known for his science fiction series, The Softwire novels. He talked about encouraging younger children to read and his online role-playing game.

Madden said, “Haarsma was a really good speaker, and his presentation was captivating.”

“I Write” and the other two submitted poems are not the only poetry Madden has written. She enjoys writing free verse, as well as haikus and structured poems. She has also submitted poems in other contests in the past. Her love for writing leans toward more to poetry over prose. Despite her dream of an engineering career, she will “always continue to write” as a hobby.

Below is Madden’s prize-winning entry:

I write
Because I’m angry
At all that has transpired
And where else can I yell?

I write
Because I’m awkward
Failing at the real world
Ignoring their snide remarks and snickers.

I write
Because I’m lonely
And paper, pens, a pencil
Can be such great friends.

I write
Because my thoughts
Are spiraling out of control
And on paper they make some sense.

I write
To pass the time
That is flying quickly by
Hoping it will never run out.

I write
To tell my secrets
In a place that is so loyal
And will never betray me.

I write
To describe my universe
For future generations
To see the world as I see it.

I write
Because I’ve been told
That someday I could be good
And I fear letting them down.

I write
because secretly
I’m hoping someone might care
Enough to read my works.

I write
To prove a point
That nothing is as
It seems.

I write
To tell my story
To explain my thoughts
To others and to myself.

I write
Because writing is all I have
It is mine alone
No one can take it away.

I write
Because I love it:
The blur of scribbled words
Flying off the page
The secrets I can whisper
Somewhere I know they’ll be safe
And in a hundred years I swear
You can bet that even then will
I write.