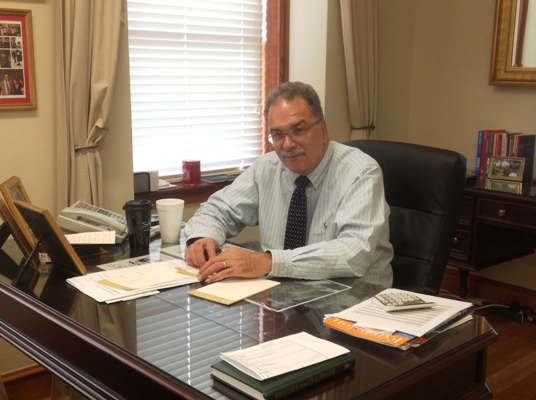 Although he's not new to the AHN community, Mr. Raimo is one of the new teachers teaching this year.

Many new teachers have joined the AHN community this year, but this new teacher is a face everyone at Academy is well acquainted with. Mr. Art Raimo is no longer just the president of the school, but now he teaches sophomore Contemporary History.

For Mr. Raimo, teaching history is anything but foreign to him. In the past, he performed the president-teacher juggling act; If there was a position open, he did not mind filling the gap. This year, since no other history teacher could fit another class into her schedule, he offered to take on the job.

With having a class to worry about in addition to the demands of school president, one would expect Mr. Raimo to faint from exhaustion. However, he is faring quite well. “The time in the classroom isn’t stressful, but preparing for the class and grading the papers takes some time; but I knew that going in. It’s only one class with eighteen students and it’s the first set so it doesn’t rotate, making it easier for me.”

The block scheduling, one of AHN’s new innovations this year,  works to his advantage as well. “I have a lot of things going on during the day so having it every other day instead of every day makes it easier for me too.”

Between teaching and presidency, he guarantees that being president of AHN is a much harder role as it has more responsibilities. However, he recognizes that teaching holds a heavy burden as well. “I’m only teaching one class which isn’t so bad. But when you’re teaching five sets and probably have three preparations, now that’s a lot of work. So I’ll be the first to acknowledge that a teacher is in some ways just as stressful and teachers certainly work just as much as I do.”

Mr. Raimo exhibits versatility by performing such a feat while staying level headed. And although he isn’t new to our school, we welcome him to the history department.