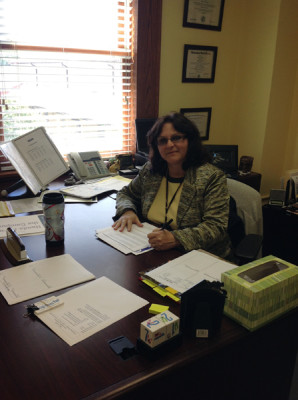 After a search to find a new Vice Principal, it did not take long for Academy to find Mrs. Florie Buono. As it turns out, it didn’t take Mrs. Buono long to find us either. I had the opportunity to sit down for a girl-to-girl chat with the newly inducted VP as she told me about how God showed her the path to Academy.

Mrs. Buono did not originally have a degree in teaching, but always had a love for children. When she was a teen, she went to an all-girls Catholic high school, much like Academy, but in the Bronx. It sat on the Hudson River, like Academy sits on Bayshore. The school emphasized community service and Mrs. Buono found her passion helping autistic children. She decided early in life that her calling was to help children.

Mrs. Buono never forgot Sister Jovinina’s words of encouragement in her time of insecurity. After teaching for a number of years, Mrs. Buono finally received her degree in education and became an administrator at a public school. Then, after a number of years working in the public school system, Mrs. Buono felt that she needed a change.  Once again, God stepped in and suddenly Mrs. Buono thought to check the Academy’s website. There, she learned of the new opening for Vice Principal and seized the opportunity.

Mrs. Buono’s relationship with Academy started when her husband taught here. She remembers attending Christmas Formal with her husband and meeting all of the Academy girls and alumnae. She would never forget the love and support she received from the Academy family in a time of need. Mrs. Buono felt blessed to have the opportunity to return to the halls of Academy. Once again, God lead her to where she was meant to be.

Now, as Mrs. Buono moves into her new office, pictures of her and her husband at the Academy Christmas Formal adorn the shelves.  Many of the alumnae and faculty remember Mr. Buono when he taught at Academy and remember Mrs. Buono as well.  When asked how her husband proposed, Mrs. Buono was happy to share the humorous story. She went on a date to the beach with her then-boyfriend and his younger brother (she admits to being a little annoyed at the fact that his younger sibling had to tag along). Following this, they attended a family dinner. Someone proposed a toast and everyone was served a drink with ice. After the toast, however, the family members around Mrs. Buono kept offering her more to drink. Confused, Mrs. Buono accepted until finally, she found the engagement ring in her crystal glass. Needless to say, she said yes.

Mrs. Buono was also more than willing to give advice to current as well as past Academy women.

Academy girls can benefit from Mrs. Buono’s words of advice and we are all happy she is here to give them.