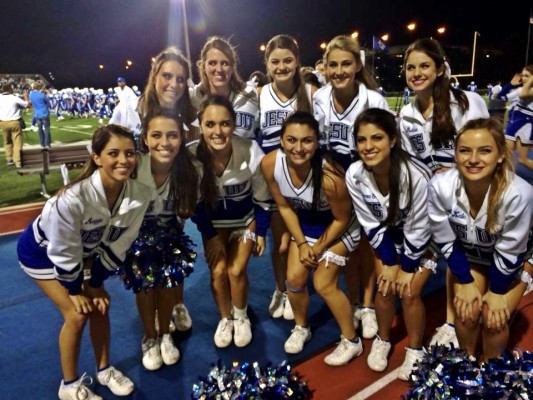 Much work goes into upholding the prestigious tradition of Jesuit varsity cheerleading. Each week, the Academy girls practice on an average of two days a week for two hours each day. Every cheerleader looks foward to Friday nights where all the hard work pays off, and they get to enjoy the game! The crowd may see clean stunts, cheers, and chants, but these performances takes a lot of preparation.

Every game day is a thrilling day for the cheerleaders, but last Friday topped them all. Not only did they cheer for the arguably the biggest game of the year (Jesuit vs. Tampa Catholic), they were invited to perform at Jesuit’s all school pep rally during the day. While the rest of the Academy girls are at the beach, shopping, or having lunch (because of Parent/Teacher conferences), the cheerleaders had to prepare for the pep rally. Most of the cheerleaders slept in late, but others got together to work out or get smoothies. After they got their day started, the girls all put on their uniforms and threw a little makeup on (too early in the day to put a lot of make up on, but performing in front of every single Jesuit student and faculty calls for a tad bit of makeup). Anxiously, the girls piled into each others’ cars on what would soon be a car ride full of loud music, and predictions how the night would go. While most of the girls were excited and antsy, senior Alexa Camareno was very calm.

“I have faith that the Tigers will play their best and pull out a win!”

The pep rally included various performances to help rally Jesuit school spirit. Very similar to last week’s homecoming pep rally, the Jesuit Cheerleaders performed their distinguished routine. This week, the cheerleaders had practice both Monday and Wednesday to prepare for this routine.

Thursday, the team went to Jesuit after school and decorated the Varsity locker room with candy, cookies, and posters. Although this may sound very like a great time, most cheerleaders have a love/hate relationship with going in the locker room. In movies, such as A Cinderella Movie, when girls walk into the locker room and start talking, they do not flinch once. But, let’s just say it would be best to hold your breath the whole time decorating the Tigers’ room. No matter what, the cheerleaders take their role to heart to brave the locker room frights to pep up the football players.

After the pep rally, most of the girls went home to relax. After changing into the traditional uniform, the girls had to grab something to eat. The common restaurants before the games are Tijuana Flats, Chipotle, and Panera; the girls don’t skimp on portions, as they need a good amount of fuel to stay energized for the two hour football game.

Before the game starts, the cheerleaders warm up and stretch on the sidelines while the beats of [the football players’] warm up music get them even more pumped for the game. To the average spectator, the cheerleaders may appear calm, but below the surface, there are nerves. By the opening kick however, that anxiety is transformed into positive energy.

After the warm up, the team joins together in a circle for the weekly prayer for the game, followed by the Lord’s Prayer. This prayer is a ritual before every game in order to pray for the safety of the players and the game.

Then it’s time to go straight on to the sidelines to get poms, and run out on the field to create “run-through lines” to create a tunnel for the players to run through. Most of the cheerleaders enjoy holding the banner that the boys run through, especially on the big rival games! Holding the banner gives the girls an opportunity to feel the football players’ energy and how badly they want to win!

Throughout the game the cheerleaders are continuously pumped up by Jesuit’s student section: Blue Tide. The boys of Blue Tide keep the energy up regardless of the score, and because this was the famous Jesuit vs. TC game, the bleachers were fully packed! Each time the cheerleaders would rotate from watching the game to pumping up the fans, they would feed off the energy of the crammed packed stands of parents, returning alumni, and students from other schools.

After a close game, the Tigers came out with a win! On the sidelines, the cheerleaders watched the football team supported by Blue Tide (who rushed off the bleachers to the fence of the field due to excitement), proudly sing the [Jesuit] alma mater to close out the game.

Thankfully, the football players were in a good mood afterwards, so they all wanted to celebrate! Usually the cheerleaders gather with the football players and the other Jesuit and Academy students that attended the game and eat at Hooters or Chili’s.  Going to dinner always brings everyone together and closes out the night leaving everyone with a full heart…and stomach.