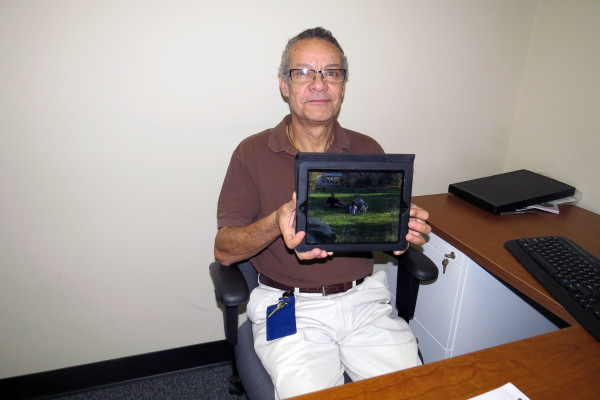 Mr. Ruano displays a photo of some of his current foster children playing with his biological son and his dog.

Something interesting many do not know about Spanish teacher, Mr. Jose Ruano is that he and his wife are foster parents. When their son was away at college, Ruano and his wife were left with a large house with many rooms and wanted to find a way to put them to use. Thus, the couple made the decision to become foster parents.

The process of becoming foster caretakers takes about eight months, requires taking numerous classes, and earning specific certifications. The classes are once a week and can be up to three hours at a time. The classes teach vital information about taking care of underprivileged children such as general parenting skills, the horrors of child abuse, child education, and even babysitting. Most importantly, though, the classes focus on understanding children that have endured rough upbringings.

Many children in the foster system have been brought up in situations such as having alcoholic parents, prostitute mothers, or simply single parents that are unable to support them on their own. The process to learn and understand this type of childcare is long and involved to ensure that parents know everything about caring for children that come from “broken homes,” as they are often called.

The amount of time that each child or siblings stays with a particular family varies. The longest that Ruano ever cared for a specific set of siblings was three years; they were two sisters.

One would think that caring for children for up to years at a time would develop very special relationships, but Ruano says that he does his best to bond with the kids, without getting too attached. He said, however, that his wife often gets quite attached to the children, and finds it hard to say goodbye to them. He comments, “You never know how long you are going to have each child, so you need to be willing and ready to let go whenever the time comes.”

Ruano admits that the job can get overwhelming at times. Caring for young, developing children can be difficult, especially when they first arrive and you are still getting to know them. “I enjoy doing what I do about 99% of the time, the other 1%, I ask myself why I am even doing this? I am getting ready to retire; I should be taking it easy. But, the other part of me says ‘why not?’”

When asked what he finds most rewarding from his experience as a foster parent, Ruano remarks, “Just that there is going to be a few less kids that are not suffering anymore; not only in the foster system, though, but in the world.”

The world is grateful for people like José Ruano, sacrificing so much to care for underprivileged children. Foster care is an extremely selfless deed that helps so many people.

“I feel really good that I’m able to give these kids a chance. I take it all day by day.”