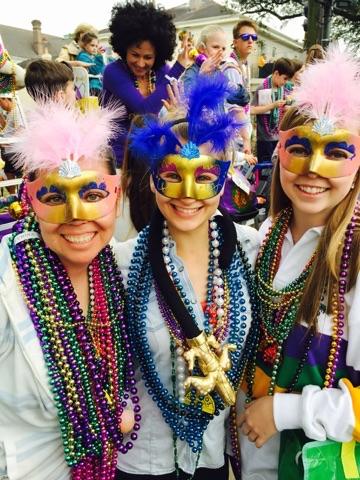 I went to four different parades the day this photo was taken!

Mardi Gras is a little bit different than Gasparilla. The origins of Mardi Gras are traced back to medieval Europe, and was first celebrated in 1703. Every year in New Orleans, a certain two weeks is set aside for Carnival season to celebrate Mardi Gras, which leads up to Ash Wednesday when the celebrations cease. This detailed list will help you understand Mardi Gras and the do’s and dont’s of parade time.

1. There are different parades everyday, for two weeks straight! Mardi Gras isn’t just one parade, it’s a season of them. There are a few different parades daily, in different places such as Uptown New Orleans, the French Quarter, Metairie, Slidell and so on. A total of 68 official parades roll within the two weeks of Carnival season, and last about 2-4 hours.

2. Each parade has it’s own name and theme. Each parade is one krewe, named after a Greek god or goddess, or historical figure. The riders are all in costume to correlate with the theme, to include masks that are to be worn throughout the duration of the parade, allowing the riders to “remain mysterious.” The parades all have their own creative theme each year, and their throws correlate with their krewe history and theme.

3. You are not constantly surrounded by crazy intoxicated people. If you want to be surrounded by drunk people and/or nudity, then you go watch parades in the French Quarter. If you want to watch the same parades without the flashing, then there are plenty of other calmer places to go. In areas like Uptown New Orleans, you will see many little kids, teenagers, parents and grandparents enjoying the parades in a family-friendly atmosphere. It all depends on where you go to watch parades!

4. They throw more than beads. When you attend a parade, you’re gonna leave with more than just plain beads. You’ll have a bunch of different stuff like cups, stuffed animals, doubloons, boas, spears, shoes, t-shirts, masks, rubber chickens, plastic swords, and even lingerie. It’s what makes a Mardi Gras parade even more exciting!

5. Don’t be afraid to get really close to a float and ask for beads. During parades, you’re allowed to go as close to floats as you want. You can even touch them! It’s really fun and easy to get close and catch some good stuff.

6. When you really want something, you have to chase the float down the street. Sometimes one of the guys on a float will be holding something that’ll catch your eye. Chances are, if it’s a really valuable throw, he’s not gonna give it to you immediately. If you want it, you either have to beg him to give it to you, or chase the float down for a couple of blocks. He’ll eventually notice your determination and throw it down to you!

7. When a marching band goes by, MOVE OVER! Marching bands take their jobs very seriously. They play excellent music, but if you’re in their way, they’re not gonna go around you. Most of the time, they’re marching in straight lines and taking up the whole street, so they don’t have room to go around you if you’re in the way. If you don’t move, you will get hit in the head with a heavy brass instrument. And it hurts a lot.

8. Some doubloons are valuable! What are doubloons you ask? They are different colored aluminum coins that represent each krewe and their parade. Most of the time men in costume riding on horses hand them to you during parades. The doubloons from well known parades, such as Rex, Bacchus, Muses or Endymion, are very valuable. Sometimes people may give you money for them! Always make sure you get a couple of them at a parade.

11. There is a King of Mardi Gras, and his name is Rex. King Rex has reigned over Mardi Gras for over 100 years. Each year, a different New Orleans benefactor gets to be Rex. The identity of Rex remains a mystery until Mardi Gras Day, when Rex rides through his parade with the Krewe of Rex.

12. Dressing up on Mardi Gras Day is a must! Mardi Gras Day is the last day of Carnival for the entire year, so you need to end it with a bang! Not only is it fun to dress up, wearing a costume on Mardi Gras Day follows the tradition of masking, just like the riders do in the parades. Don’t be afraid to go all out with your costume, it’s super fun and everyone loves the good costumes.

13. You will not be judged for the amount of King Cake you eat. Seriously. Shovel it down.

14. Don’t worry about the trash because the city of New Orleans really knows how to clean. When you’re at parades, you can throw pretty much anything on the ground. The city always sends out professional street cleaners at the end of parades, so the streets look spotless when they’re over.