What is the real problem behind your mental behavior? 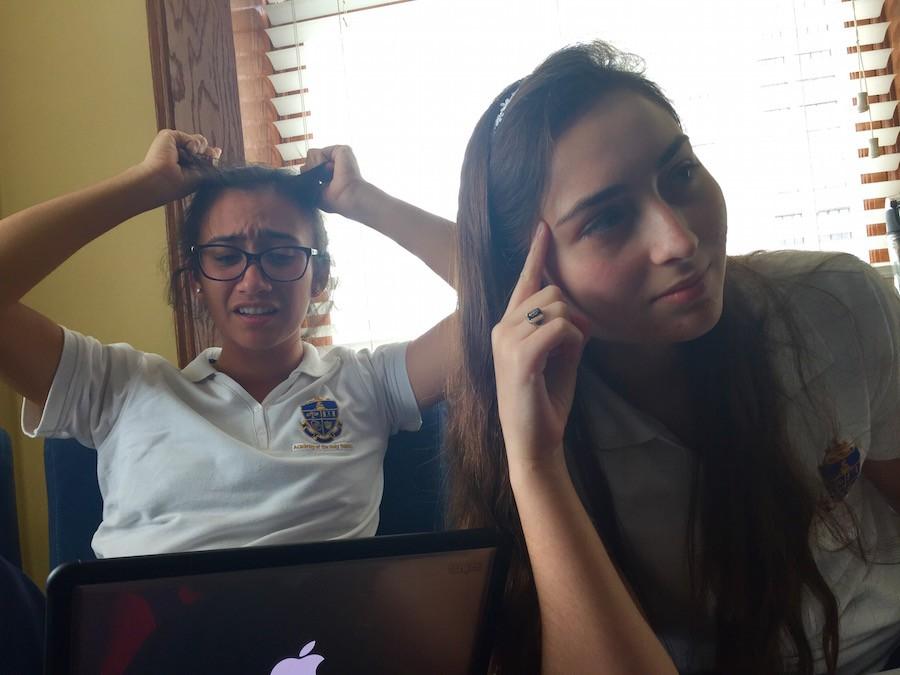 Amelia Llerena and Taylor Shaw say they have doubted their sanity in school more times than they care to admit.

Often times, we find a weird quirk about ourselves and automatically assume that there is something wrong with us. As a result, we quickly jump onto WebMD, match up our symptoms, and diagnose ourselves with some rare disorder (“oh my god I tooootalllyyyy have that.”). But where is the line drawn between a quirk and something more? When does this recurring stress, this need for organization, or this difficulty focusing actually become something of concern? What is it really?

Everyone gets stresses and anxieties–whether it’s with school, boys, friendships, or family life. It is entirely different to say “I feel so stressed right now” than to claim “I have anxiety”. The American Psychological Association shares what anxious feelings might be telling to an anxiety disorder:

Senior Jackie Joyce says that she started going on anxiety medication when she realized that her state of mind consisted of feelings like the ones above, “I was on another medication and it would put me in bad moods; I was very anti-social and one of my good friend’s noticed and so I went to the doctor and she prescribed me something for anxiety.” The change after starting the new medication in 2013 didn’t take immediately, but soon after, “I felt happier and that I wasn’t stressed as much, and more active too.”  If you feel that you experience anxious feelings such as these on a daily basis, it might be more than just natural human stress. However, sometimes we just need to put on our big girl pants, talk to a friend, and watch some Dirty Dancing.

According to the International OCD Foundation, Obsessive Compulsive people usually have thoughts, actions, images, or ideas that they become absorbed in. They hold obsessions that are outside of their control, and in most cases he or she realizes that these obsessions are abnormal.

While many Type-A people feel the need for routine, organization, and things looking “spatially pleasing”, most of them can function in the midst of a chaotic day. A person with OCD usually feels as though they are held back from participating in daily activities in order to have everything “perfect”. Sophomore with OCD Samantha Stagg says that she has to count all of her steps and change the volume to an even number in order to feel at ease. She elaborates, “I feel as if something bad will happen to me and I can’t settle down if I don’t follow up with my routines.” Clearly, there is more serious aspects to this disorder than just being over organized.

Academy’s High School learning specialist, Danica Rodriguez, says that “Inattention is a very real issue among teenagers. Whether a student has ADD or not it has to do with a lot of technical brain stuff. Students who struggle with ADD.. [feel that] if they could focus and turn things in on time and not forget things, they would.” Maria Zeno, a senior with ADD, agrees, “If a procrastinator, or say someone who gets easily distracted, really tried to get something done, it could be done…someone with ADD finds it nearly impossible”.

Unfortunately, a stigma surrounds students with Attention Deficit Disorder, most likely because when someone finds that they have a short focus span they race to the doctor’s office to get a prescription. Unless your grades are suffering or your personal relationships are faltering because you cannot hold a conversation, consider the fact that maybe you just need to check into Ms. Rodriguez’s office for a quick lesson on study habits. (Side note: she’s awesome.)

Girls, don’t shout that you have a mental disorder–whether minor or major– because the student sitting next to you might actually have one. Don’t self-diagnose, and don’t let your self confidence be brought down, whatever the situation may be. If you need to know more about mental disorders, visit the website of the National Institute of Mental Health to find out more.