Plumping it up: Kylie Jenner Style 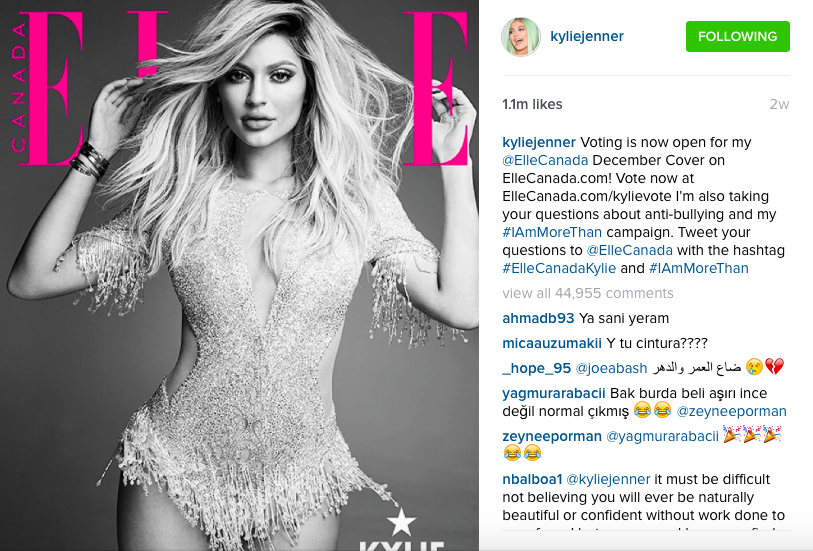 Fashionista Kylie Jenner poses on the cover of Elle Canada, a snapshot of how internationally famous she has become. Credit: Kylie Jenner, Instagram

Around the world teenage girls draw makeup inspiration from unique sources such as Kylie Jenner, the ‘queen of Instagram.’ Jenner is known for her iconic lip makeup, and in the past few months, Kylie has gone through a tremendous transformation starting  a movement followed by her new lip kit coming in the fall of 2015!

Before she announced the impending arrival of her makeup line, makeup enthusiasts attempted to recreate Jenner’s matte look. Although matte lips are her signature look, a contoured  face and eyelashes are an essential when attempting this style. Senior Gabby Verdugo comments, “ I really enjoy Kylie’s eye makeup because she emphasizes her eyelashes like I do. I can’t wait for her new eyelashes to come out!” Her makeup line will not only include lip liners, but mascara, fake eyelashes, and much more in a sea of plums,nudes, and browns! AHN girls find it very easy to follow Kylie  as she maintains an updated social media. Women all over the country take to YouTube to learn more tips and tricks from the fashionista herself.
Below is a makeup tutorial from Kylie Jenner, using makeup that can be found in stores like Sephora and Nordstrom. Sophomore Emily Venezia quips, “Sephora is a great place to shop because of their variety of makeup. They have great lipstick and the products are worth it. ”

Sophomore Grace Wipfli has used similar videos, she comments “Celebrities like Kylie and Kendall have definitely led me to use YouTube as a guide for makeup. Specifically, Kylie’s videos are easy to follow and practical because she uses products that are easily found in Sephora at International. ” Following Kylie’s example, many makeup YouTuber’s have made videos using Kylie as inspiration, under titles such as ‘Kylie Jenner Daytime look’ and a nighttime look as well! This trend towards YouTube as a makeup guide is apparent in the millions of views Kylie and makeup YouTuber’s get on their videos!

Following Kylie’s fame for her style and makeup, this past September she dropped a new app named ‘The Kylie Jenner Official App” or more commonly, the ‘Kylie app’. It is accessible through devices and computer, and requires a subscription. Kylie has also recently dropped a new website which features makeup tutorials for eyes, contour, and lips, make sure to check it out and unlock her world!