Chipotle vs. Moe’s: What draws Academy girls to the deliciousness? 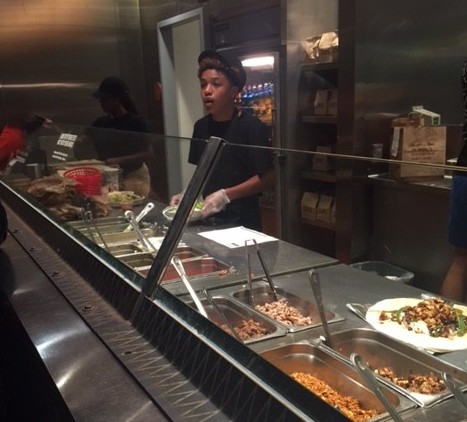 From the outside, Academy is seemingly calm and collected in all aspects of life. Once food enters the picture, absolute chaos commences shortly after, especially when having to decide between restaurants The top two fast food restaurants which Academy girls prefer are Chipotle and Moe’s. At first glance, the craziness that is the Senior lounge during lunch has a wide array of Chipotle bowls and Moe’s queso, as many Academy girls strongly identify as either Team Moe’s or Team Chipotle. As both restaurants are similar, it is argued that there is no neutral ground when choosing between the two. Chipotle Mexican Grill and Moe’s Southwest Grill are alike in many ways, both menus consist of burritos, bowls, and salads.

When asked the ultimate question on Facebook, the Senior class gave Chipotle a higher rating than Moe’s. Some girls voted for the option of Chipotle’s food, but Moe’s queso.  Jaime Jurado, a senior, had a bad experience with Chipotle, she states, “I was obsessed with it all summer long but the last week of summer I got food poisoning and since then I absolutely hate it and cannot eat it.”

In pursuit of more perspective on the matter, Achona has interviewed members of both sides. What has caused them to adamantly place their loyalty in a certain place? Is it their basic love of food? The queso? The deliciousness of Chipotle’s fresh guacamole?Let’s hear what draws them to the doors of both restaurants:

Kelsie Killian, a sophomore, has been eating at Moe’s for the past three years.

Are you team Chipotle or team Moe’s? Moe’s

Why are you drawn to this restaurant? I like it because they have white cheddar queso and their chips are good quality. They also have more options than Chipotle to put on the burrito.

Would you consider eating at Chipotle? Yes, because Chipotle has better salads. Despite this, I usually find myself at Moe’s anyways.

What does your typical meal consist of? Grilled Chicken Burrito with lettuce, queso, sour cream, and cucumber.

How often do you eat at Moe’s? Once a week.

Junior Lexie Diez has been eating Chipotle for two years.

Are you team Chipotle or team Moe’s?  Chipotle.

Why are you drawn to this restaurant? Their guac is really good and I like Mexican food. To me, it is the best option.

Would you consider eating at Moe’s? I would eat at Moe’s because they have good queso.

What does your typical meal consist of? Burrito bowl with brown rice,steak, cheese, sour cream, and guac with chips and a sweet tea.

How often do you eat at Chipotle? Once every two weeks.

Senior Maddie Matesich has been eating at Chipotle for 4 years. “E. coli can bite me, I’ll always be loyal to Chipotle,” Maddie responded when asked if the recent outbreak at Chipotle restaurants  in Washington would affect her frequent visits to the restaurant.

Are you team Chipotle or team Moe’s?  Chipotle

Why are you drawn to this restaurant? It is the perfect place to go to get lunch or dinner. It always satisfies my cravings and makes my day a little bit brighter.

Would you consider eating at Moe’s? Only if I really wanted Chips and Queso, otherwise no.

What does your typical meal consist of? Burrito bowl, brown rice, black rice, chicken, sour cream, a lot of cheese, a little bit of lettuce, and a side of corn. I get a water cup with lemonade.

How often do you eat at Chipotle? At least once a week.

Senior Maggie Marquart has been eating Moe’s for 17  years.

Are you team Chipotle or team Moe’s?  Moe’s

Why are you drawn to this restaurant? I love the friendly atmosphere and building my burrito. Moe’s over Chipotle always.

Would you consider eating at Chipotle? Yes,  I like their bowls but Moe’s is better, the chips are A1.

What does your typical meal consist of? Home wrecker burrito with chips and queso.

How often do you eat at Moe’s? Not often enough.

Despite the competition between the two restaurants, both are deliciously appetizing and appeal to all who enter. Make sure to check out Chipotle’s and Moe’s menus to see which one tickles your appetite more!