Girls can be in the friend zone, too! 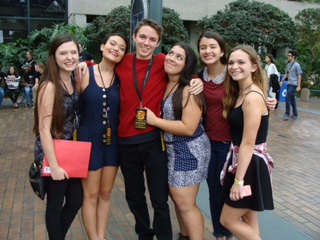 There’s meeting for the first time, texting, talking, hanging out and finally, the dating stage. Dating in the 21st century has become such an elaborate process to the point of Facebook adding an “its complicated” button as an option for relationship status. Try explaining to an adult why “talking” is not the same as dating and you will understand how complicated this process has become.

Often, teens will start to hangout with a group of girl and guy friends. A group chat is made, snapchat usernames are exchanged and a beautiful friendship starts to blossom.

Unfortunately, in some cases, girls will enjoy the company of a boy in their friend group and start to have feelings for him. He’s nice to you, texts and snapchats you all the time, he probably likes you back, right? Well, often people misinterpret niceness with flirting, and this creates further confusion and tension.

Trying to define the relationship is one of the hardest parts of the process. What if he doesn’t like you back? Is the friendship over then? Will you never speak to each other? What will happen to the friend group in general?
So the big question is: are you being friend zoned or not?

And in case you’re wondering, the friend zone is exactly what it sounds like. As defined by Urban Dictionary, it is “ A state of being where a person inadvertently becomes a ‘platonic friend’ of an attractive person who he was trying to intitate a romantic relationship.”

While it is believed that men are the only ones stuck in the friendzone, it is not a myth that women find themselves in it too!

Rebecca and Brendan met during their sophomore year at a Jesuit game. There was instant chemistry and after a short amount of time, the pair entered the “talking stage.” Rebecca is one of my best friends, so keep in mind that I embarked on this journey with her. For months, I received an unlimited amount of screenshots from Becca, about cute things Brendan would say. They texted each other back and forth and eventually started going on dates. Nevertheless, they still weren’t a couple. How does this make sense, you ask? I don’t know either, they were just stuck on the talking stage….for five months. (Really, Brendan?) Finally, after months of waiting, he finally asked her to be his girlfriend.

Today, two years later, Becca is glad that he took his time, “I think that is why we have been together for so so long. It gave us the opportunity to be best friends before we began dating. We still are best friends.”

Nevertheless, those five months of waiting also seemed like an eternity. I recall hanging out with Becca and Brendan at jesuit games, where they would be holding hands and having a good time with the rest of squad. Through the night, people would constantly notice their PDA, come up to them and ask “Omg!! Are you guys dating??!!” This would create so much tension in the room that even I could feel secondhand embarrassment for her. Becca and Brendan would just giggle and say “No, we’re not.” Eventually, this question became their catchphrase, and they began to utilize it in a joking matter.

Overall, Becca and Brendan are Exhibit A of what it is like to date in modern day society. Unfortunately, everyone starts at the “Talking Stage” and remains in it for a while. I personally don’t understand what the difference between “talking” and “dating” is, other than the title, but if you’re lucky, it won’t be long, and if you’re Becca, it’ll be five months. Whatever it is, just know that there is a light at the end of the tunnel, and yes you can escape this stage and eventually date!!

Becca’s relationship is proof that the friend zone situation is not necessarily composed of the girl denying the guy, it could perfectly be the other way around.

Throughout the internet there are several memes of things girls say when they are trying to curve a boy, yet I have not seen any of the other way of the situation. Other typical phrases that I’ve seen online describing the moment in which a guy is friendzoned include “You’re like a brother to me”, “Who’s that? He’s hot, is he your friend?” and “You’re such a good friend!”

Still, the real dilemma is, how do you escape the friend zone?

Admit the Status and back off – Although you want it to be more than a friendship, you need to understand that right now you are just friends. If you wake up every day hoping that he is going to magically have feelings for you, it won’t happen. Besides, a good friendship is the foundation for an amazing relationship. So focus for now on relaxing and getting to know him…as a friend.
Be the best you you can be – Work on yourself first! This will strengthen your confidence and allow you to take care of others, since you have been taken care of. Get in shape, not only for the physical appeal of it, but so that you may feel amazing and confident. NEVER go through extreme dieting or ruthless fitness for a boy. First off, realize you’re not doing this for him, you’re doing this for YOU.
Don’t depend on him – I know this is hard, but you really can’t hang on to him like a sad puppy. Not only will this make you seem clingy, but it won’t allow you to be happy. Hang out with other friends, including other guys! Happiness is contagious, if he notices how happy you make yourself and others around you, he will want to join in!

Lastly, the most important factor is that you shouldn’t be with someone who you constantly have to beg and chase for attention! I rather be alone than with someone who isn’t sure that he wants to be with me. Respect yourself, you are a queen!! Understand how valuable you are and wait for the prince, don’t settle for frogs! If he just wants to be friends, then accept that and let go of the hope that “maybe someday” you will be more. This will allow you to heal, maintain an amazing friendship, and prepare you for the future when “the one” will arrive.