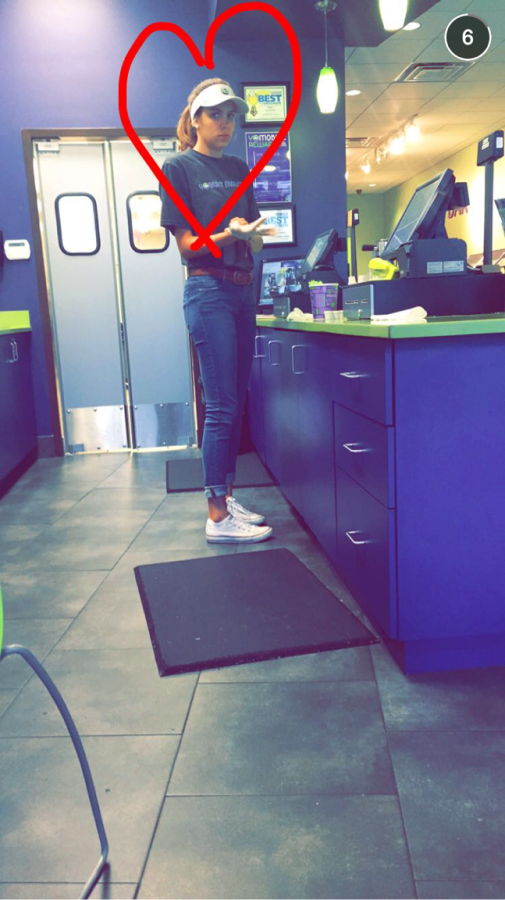 After scoring highly her yearly evaluations, Junior Lindsay Calka received a ten cent raise at her job at Yogurt Mountain (YOMO) in Carrollwood. Calka is a crew member responsible for cleaning, manning the register, handing out samples, and refilling the topping bar. Since she regularly works the night shift, Calka’s job includes a lengthy closing schedule involving her least favorite chore, cleaning behind the yogurt machines.

“You only see the 2D part of the yogurt machine where you crank the handle, but there’s actually this huge, five ton lock that’s behind it and every single night you have to pull it back with all your might and scrub. There’s a base pan of hard yogurt and we have to scrub it…it’s really gross.”

Calka works every Sunday from 7:00 to 11:00pm, then selects a couple of weekdays to work those same hours depending on how hectic her week is. She may also opt to work Friday or Saturday from 6:00pm to midnight if her schedule allows, but she assures,

“I never work more than three times a week.”

For Calka, managing work and school truly is a balancing act. When she first started she reports she was optimistic about being able to do school work after returning from YOMO at night.

“Now I just know I can’t. I’ll be able to study for at most an hour afterwards so I just have to plan around it.” she states.

Calka relies heavily on her agenda to keep her organized and motivated. She has also found role models within her work space who inspire her to be her best. She works with a man named Steve, a sprightly fifty-some year old with an admirable work ethic and an undying passion for frozen yogurt.

“Steve is the best Yogurt Mountain worker ever. He sometimes gets fifty cent raises because he’s a shift leader and he’s amazing. If we need someone to cover a shift, Steve will do it. He is always running around doing stuff. And he loves Taylor Swift.”

After a week of long shifts, Calka revels in her paycheck. When asked what she uses the money for, she answers,

If she works once a week Calka makes around $32, just shy of filling up her tank, so she tries to work at least twice to make enough money to fuel her car, and a little extra to fuel her morning with her weekly Starbucks drink.

Now with her raise Calka earns $8.15 an hour, ten cents above minimum wage. She predicts,

“In two weeks I’ll have an extra dollar. Maybe I’ll get a slurpee.”

Despite her long nights and hectic schedule, Lindsay finds enormous value in her work and plans to keep her position throughout next year. She attests that her favorite part of her job is

“seeing the regulars. There’s a lot of people who come weekly and so it’s fun to see them and make friends with them…also shift yogurts.” she remarks.

Shift yogurts are the free, ten ounce reward staff members get every time they work a shift. Calka’s favorite flavor is caramel pretzel.
“They have it in right now!” she reports. Whenever you’re in the mood for froyo, head to Yogurt Mountain and Calka will happily serve you a sample.