He Said, She Said: Planning for Prom 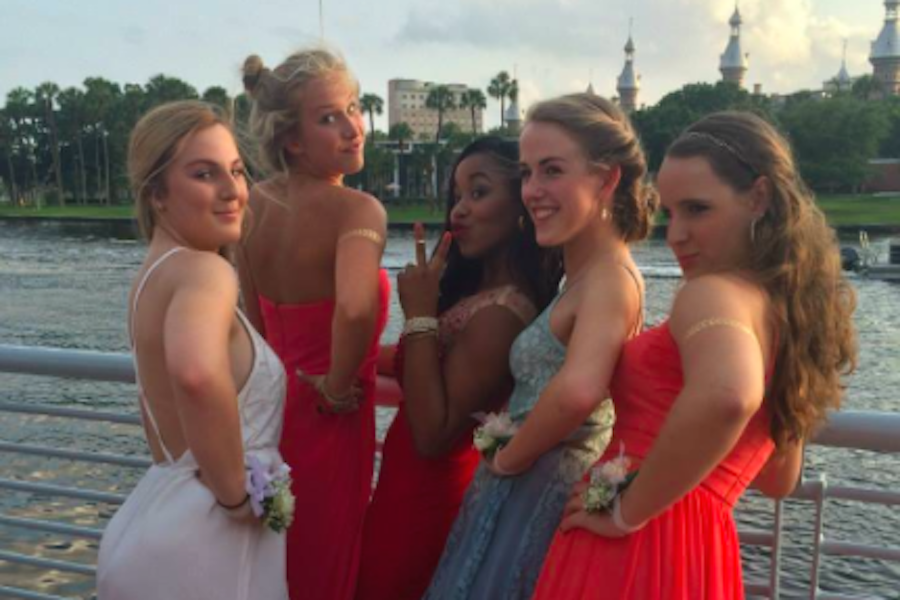 Contrary to Dickinson's and Sutton's shared belief that a girl is less likely to attend prom dateless, a group AHN seniors chose to "bro out" and go solo at their junior prom last year.

With prom season well underway, many students have already had the opportunity to attend a dance or two, but Academy juniors and seniors continue to look forward to their own prom on Saturday April 23. Regardless of whether or not they have attended prom before, everyone is fully aware of all the planning and preparation that goes into making the night run as smoothly as possible. However, it’s evident that boys and girls have dissimilar priorities when it comes to prom planning.  This also includes contrasting opinions in regards to how the opposite sex conceptualizes the same ideas. Fortunately, a few volunteers agreed to offer insight as to how they perceive a boys and girls general approach to tackling prom.
Meet the Participants


Do boys or girls spend more time finalizing prom night plans?
Dickinson: “A month in advance is when I start looking at different jackets, shoes, ties… I think girls start planning from around three and four months out.”

Johnson: “Well I usually make my makeup appointment as soon as I find out the date because the lady I like at MAC. She’s very popular and it’s really important that I get her because I only let her do my makeup. But, I usually don’t start finding a dress until two weeks before. I think boys start planning two weeks in advance, usually after the girl finds the dress.”

Sutton: “We spend anywhere from a week right up to the day before. All I have to do is dry clean my tux, and I’ll probably hold off on ordering the corsage… we just can’t focus long enough to put a plan together. Girls probably take like a week to finalize too, but it’s much more detailed. They usually have their day planned down to the minute and I bet it drives them crazy that we don’t.”

What aspect of the night do boys and girls each prioritize?
Prendergast: “I’d say guys probably look forward to the after party the most so that they can hang out with their friends like they’re used to. Girls center their night more around the pictures. They need to make sure they look nice ahead of time so that the pictures turn out well but then after those are done, we can get on with the night.”

Sutton: “I absolutely prioritize the after party because that’s what makes the night. Every prom group does everything else the same way, but it’s what you do after that individualizes the experience. Girls definitely prioritize pictures. But only really because they gotta time everything perfectly with appointments and such.”

Torres: “For girls, pictures, because we spend so much time getting ready. I would say aspects of the night that boys prioritize the most would be the dance itself and the after party.”


How do boys and girls compare when it comes to deciding who they are going to take as a date?
Dickinson: “Usually you take whoever you’re dating or talking to.”

Johnson: “I take whoever I’m dating at the time, and boys typically do the same.”

Prendergast: “I feel like both boys and girls choose dates in a similar way. We try to look for someone who we think we would have a good time with throughout the night.”

Sutton: “Occasionally a guy will ask a girl he likes, but otherwise he would take a friend or someone who’s friends with the rest of the girls in the group. Honestly, unless a girl is dating someone, it’s usually a complete surprise who they end up asking.”
Is a boy or girl more likely to go to prom alone?
Dickinson: “I wouldn’t go alone because taking a date adds to the overall experience. But I think a boy is more likely to go alone because girls get asked all the time.”

Prendergast: “Girls are definitely more likely to go alone. Last year, I went to prom alone along with several other girls and it was such a great time. It’s nice to be more independent and only have to worry about yourself throughout the night.”

Sutton: “A stallion like myself would never go alone, but I think a girl is even less likely to go alone just because, even though it’s her prom, the guy is still kind of escorting her in a way.”

Torres: “I would say it’s more likely for a girl to go alone to prom, because they may just want to have a girl’s night out.”
How important are “promposals” to each gender?
Johnson: “I personally LOVE promposals. That’s just because I’m cheesy like that. Boys kind of just go along with whatever the flow is.”

Prendergast: “I feel like girls expect to be asked to prom in a clever or cute way like a sign along with some food item, but I don’t think it matters as much to guys. In my experience, if you just buy them food they’ll be happy.”

Sutton: “I think promposals are important to set yourself apart, but so many people make it way too ridiculous. You’re not getting married. Find your chill. I feel like some girls use promposals as bragging rights.”

Johnson: “I usually start getting ready around ten in the morning, but guys wait until five minutes before pictures.”

Torres: “On prom night, I believe that an average guy begins to get ready as hour and a half before pictures because all they have to do is take a shower and get changes. A few girls start getting ready a few days in advance, with spray tans, eyebrow waxes, and mani/pedis.”


What is your routine and how does the opposite gender’s routine differ?
Prendergast: “Before the dance, I’m pretty sure guys just shower, get dressed, and then they’re ready to go. A girl’s routine is a little more complex. The night before, I get my nails done. I also usually shower the night before or occasionally the morning of. On the day of the dance, I go and get my hair and sometimes my makeup done at a salon. When I come home, I make sure it all looks the way I want or do touch-ups if necessary. Then I put on my dress, shoes, and jewelry. Then I double check again to make sure everything looks right and then I’m ready to go!”

Sutton: “I shower, tame my mane, pick up the corsage, get dressed, and attempt to be on time. In that order. I don’t even know what a girl does honestly, all I know is that they somehow are able to fill an entire day with preparation.”

Torres: “A boy’s routine for prom seems like a routine they would take on any given day, except they have to wear a suit. A girl’s routine is completely different than their everyday routine, which makes a lot of girls super excited for prom night because they get to pamper themselves.”

As is expected, both boys and girls often resort to generalizations and exaggerations when it comes to the opposite sex’s prom planning propensities. However, it is also evident that, regardless of gender, everyone does prom differently and no one way is more right or wrong than another.