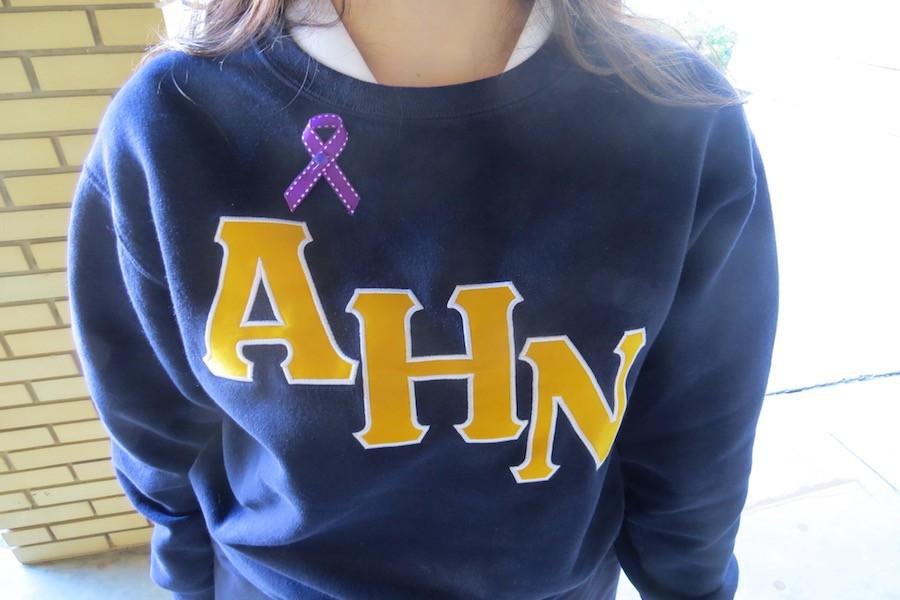 The color purple represents domestic violence and abuse. Dohme passed out purple ribbons to Academy students in an effort to spread awareness.

On Tuesday April 5, Academy had the pleasure of hosting guest speaker Melissa Dohme, victim and survivor of a severe domestic violence attack in which her ex-boyfriend attempted to stab her to death 32 times outside of her home in January of 2012.

In her 48 Hours episode, “One Last Hug,” she reflects on the experience saying, “When I heard that they were going to take me by helicopter to the hospital, I knew right then that they didn’t think I was going to make it. They only airlift patients who are so severe that they are about to die.”

However, she lives to tell her story, guest speaking frequently to spread awareness for domestic abuse. The foundation of Dohme’s speech drew on her personal story, but she carefully spindled her experiences into lessons, hoping that she would reach the minds of Academy’s juniors and seniors and provide them with some semblance of a take-away message. Dohme opened by delving into the progression of her relationship with her attacker, Robert Burton.

Although it began as a normal high school relationship, she recalls a significant shift in Burton’s personality when she began applying for colleges. Burton, who began working immediately after he graduated from Clearwater High School, grew jealous of Dohme’s options for furthering her education. It was when she gave into his requests to stay local that she began to fall victim to his possessive tendencies.

In retrospect, she advised her audience to, “Follow your heart and make your own decisions. Someone that loves and supports you will not put you down for what you want to do.”

Then, Dohme digressed into some basic warning signs for a potentially abusive relationship, connecting events in her relationship that serve as red flags, such as extreme jealousy, attempts to isolate the other from friends and family, intimidation and humiliation via social media, and threats of self harm or harm to others. When Dohme recognized these within her own relationship and Burton was first arrested for domestic battery, their relationship finally ended. A mere three months later, on January 4, 2012, they met again and he pleaded with her to meet him outside her home to briefly converse for the sake of gaining closure and proceeded to stab her 32 times.

Now, Dohme is able to realize, “I wouldn’t go back and change what happened to me. I feel as though my experience was worth it and I feel like I know my purpose and why God saved me.”

However, Dohme’s road to recovery was the furthest thing from easy, especially when it came to her education. She had difficulty doing simple math equations and identifying differences in photos in her therapy sessions. When her nurse told her she thought she may never reach her previous intellectual capacity, Dohme accepted the challenge and went back to school as a part-time student only a few weeks into her recovery.

After delivering the commencement speech at her graduation from St. Petersburg College, Dohme transitioned into her position at Hands Across the Bay, a non-profit that aspires to help families in crises in the Tampa Bay Area. At a speaking event, she met one of the firemen that was on her case, and they fell in love almost immediately.

Dohme asserts, “I made the decision that the attack would not define me as a person. When you choose to forgive those who hurt you, you forever take away their power.”

Senior Camille Yodzis comments on Dohme’s ability to turn her life around, saying in admiration, “Melissa’s ability to overcome a huge obstacle and never give up on her dreams is so inspiring to me. It is amazing that she continues to give back to the community in such a big way.”

Ultimately, Dohme’s story serves as an example for Academy girls and the greater community that any situation, even those as severe as a domestic violence case, can be overcome in time with perseverance, dedication, and hope.