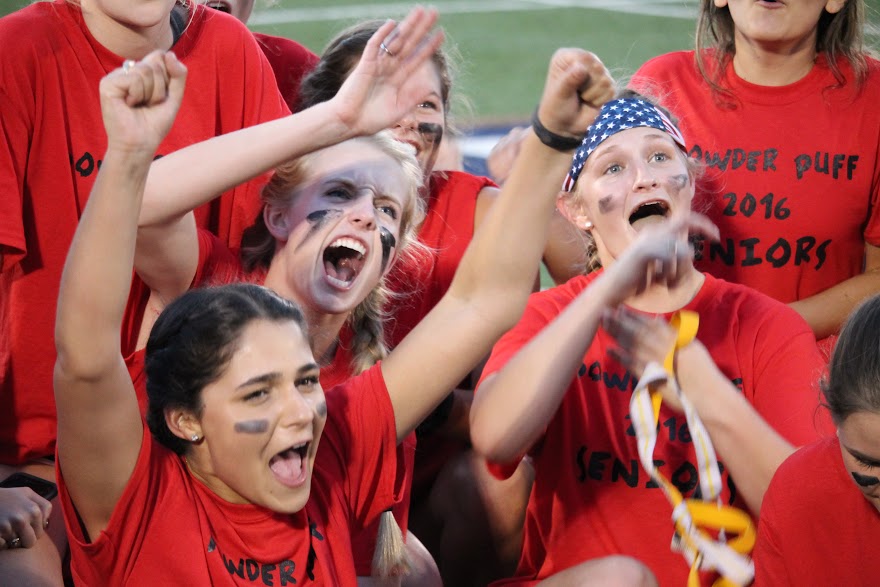 Student Council’s annual flag football game between the Seniors and Juniors, Powderpuff, was an event you could not miss, and if you did we feel really bad for you. Luckily, we’ve got it covered from the perspectives from those playing, face painting, coaching, working, and spectating the flag-ulous game.

Most do not know that Alejandra Lozano, Senior Student Council member, had been preparing months prior to this event. This definitely was not a game thrown together last minute; the theme, t-shirts, AHN guests, and extra activities were decided and perfected throughout a span of two months.

“Most people don’t know the preparation and effort put into our events. There’s a lot that goes on behind the scenes so that way when people show up they just have a great time. We make it as fun as possible for our AHN family,” states Lozano.

That is what she and Student Council did on Wednesday, April 6 with their competitive Avatar theme. Seniors as the Fire Nation showed incredible spirit with slogans such as, “Mess with the Fire Nation and you’re going to get burned,” and the Juniors as the Water Tribe showed their enthusiasm in their face-paint even when the tides were against them in the outcome of the game.

However, prior to the game, the Dad’s Club generously supplied delicious hot dogs and hamburgers, drinks, and even candy free to the crowd. Anyone who attended the event could say missing out on those burgers and hot dogs might be the biggest reason someone would regret not attending. While everyone enjoyed their food, the gathering under the pavilion included seating and free face painting by Senior AP Art students Natalie Cevallos and Hadley Chillura. Natalie’s best creation, among the butterflies, tigers, and avatar clowns, she transformed fellow Senior, Maddie Matesich, into DRAKE. Yes, Drake. Here’s a picture so you can believe it yourself.

Right before the game began, everyone bowed their head to a sportsmanship encouraging  prayer by Lozano and held their hearts to a beautiful rendition of “The Star Spangled Banner” by the AHN Quarter Notes.

The sisterly competition began promptly at 7pm with coaches Nick Leone and Luke Wichman as the Senior’s coaches and Marco Benson and Dante Phillips as the Juniors’ coaches. In the first play, Senior Camille Yodiz caught the ball from QB Lindsay Boos and ran down the field without a scratch to score the only points to be scored by any of the teams for the rest of the game. The game continued, with Juniors’ frustration fueling the Seniors’ fire. Junior, Ciara Chappell shares, “We really wanted to be the first Junior team to actually beat the Seniors, and we were so close.”

At half-time, AHN’s Jaguarettes performed a dance choreographed by the Juniors for the first time. The almost 3 minute long performance had everyone cheering to each of their moves corresponding to a Britney Spears mix of “Toxic” and “Womanizer”.

In the second half, coaches and players of the Senior team were outraged when soccer star Julia Lester ran the ball down the field to score what they thought was their second touchdown. Unfortunately, Ref Doyle called the achievement invalid due to improper play set up by the Seniors. The Seniors were upset at the point loss, but they were still ahead. In the last 45 seconds the Seniors, just as they do in the last 45 days of the year, began walking off the field thinking the game was over encouraging the Juniors to try to run the ball to tie the game. Once the Seniors saw this, all 27 seniors attacked the 13 juniors to stop them from their last attempt. The game ended Juniors with 0 points and Seniors with 6 points.

Once the game was over, Senior coaches called a team meeting. Leone gave a great resolving speech to the game; he expressed to the girls that this was the best girls’ football game he’s ever seen, and they are the best female football players he has worked (with which is hilarious because he has never had any experience with a girls’ football game at all). Leone and Wichman thanked the girls for their efforts and the honor to coach them. It was obvious that these big Jesuit football players love their AHN counterparts.

As always at these kinds of events around this time, a few got asked to Prom. Sophomore Abby Rodriguez was asked to TC Prom and Junior Tessa Vaughn asked a Jesuit boy to AHN’s prom; both with clever posters.