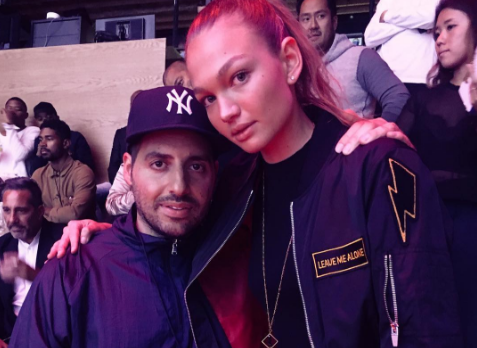 Opp states that she could not sleep the entire week before the show due to her excitement. Photo Credit: Camille Opp (Achona Online)

Ask any Academy girl what they were doing at 9:30 pm on August 13, 2016, and they would most likely reply that they were live streaming Camille Opp walk the Kith show in New York Fashion Week. The Academy community is known for consistently supporting each other, and this was no exception when Opp hit the runway in New York.

Last year, Opp made her NYFW debut in the Nicholas K show. Although the model was equally excited to work with both Nicholas K and Kith, she admits that she especially enjoyed walking for Kith because of her familiarity with the brand.

Opp claims, “One of the main reasons I was so excited for this show was because I knew a lot of people from my class were going to be watching. It’s so amazing to know that I have these 109 girls supporting me and that they were all so excited”.

The highly anticipated show was advertised to start at 9:30, however, the live stream was running an hour late, leaving Academy viewers anxiously staring at their computer screens.

Senior, Jhuztin Honrado, shares that her parents turn her wifi off at 11 pm, so by the time it was 10:30 pm and the live stream had still not begun, she began to panic.

Honrado states, “I didn’t know how long the show was going to be, and because Camille was one of the last models, I was so scared that I was going to miss her.”

Upon the live stream finally beginning, Academy girls were quick to notice Bella Hadid sitting in the front row of the audience, which was confirmed by senior Kendall Bulleit who was texting Opp’s mom.

Bulleit states, “Camille has worked so hard for her career, more than most people realize; and the people that were present in the audience that night are just a reflection on how big of a deal the show was.”

After three musical guests and two other rounds of models, Opp displayed mountain apparel in the last group of the show.

Immediately upon her appearance, pictures, videos, and supportive comments of Opp were posted on all different social media platforms, making it extremely evident how excited and proud Opp’s classmates were.

Opp recalls, “After the show, I looked at my phone and it was blown up with snapchats, texts, and pictures from people who were watching that were all so excited and proud of me. I started to get teary-eyed because I was so happy and grateful to have so many amazing friends in my life.”

Perhaps it is because of her humility, but when presented with this amazing opportunity, Opp was completely overwhelmed with nothing but love and support from her Academy sisters.