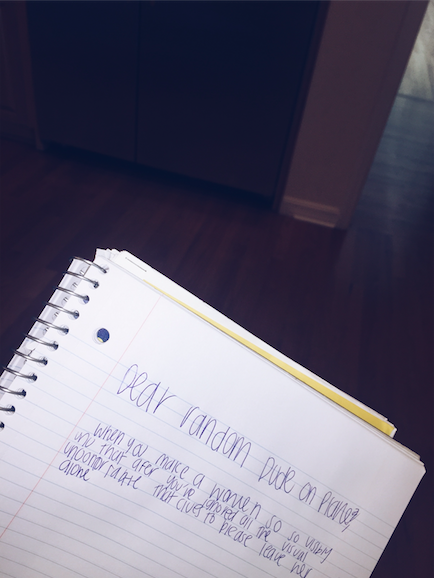 After being harassed by a “random dude” on a flight last week, actress Sophia Bush took matters into her own hands. During the plane ride, the “Chicago P.D.” star eventually had to get up from her seat on a plane after giving visual cues (one word answers, she pulls out a book, puts on a hat, she actually asks him to not speak to her with the tone and words he’s choosing to use). Bush wrote an open letter to the man, explaining why his behavior was unacceptable. Not only did she state her reasonings for being upset, but went into further detail giving some tips for what not to do next time.

Once the open letter was posted to Twitter, any woman who has ever found herself being harassed by a man despite asking him to leave her alone, found it incredibly relatable, and thus quickly became viral . Not only does this uncomfortable feeling happen among actresses who have crazy fans, but also among Academy girls who have shared similar experiences.

Senior Liz Benjamin and Junior Mia Leto were put into a similar situation when the two were at the food court. Both were enjoying lunch together when four guys walked up to them and were trying to make conversation with them. The girls at first were so short with their responses, hoping that would give them the clue they needed, but when that did not work the two walked off expecting not to see them again. After the food court Benjamin and Leto entered Starbucks where the guys followed them in yet again. This time they were sitting at a table waiting for their vanilla iced coffees when the group of boys surrounded them asking for their snapchats. Luckily the barista called their name right in time, so they quickly got up and left the store.

Senior Meredith Butler, had another situation which a guy her age made her feel extremely uncomfortable. It was a Jesuit robotics practice, when a guy checked her out multiple times and at first Meredith just gave him a simple visual clue, a dirty look. When that didn’t work and the man continued, she told him to stop staring. She went on with robotics and it seemed like the boy had stopped, but minutes later he continued again and at this point Butler stuck it out the rest of the meeting until she could finally leave the uncomfortable situation.

Senior Katherine Garcia shared a similar time when a year ago an older man made her feel uncomfortable while she was grocery shopping. She was checking out when a twenty-four year old man stopped her to ask if she wanted to go to coffee sometime. Garcia immediately told him she was in high school was not okay with going out on a date with him, but he insisted on getting her number. She refused and the only way he finally left her along was when her dad walked up.

Despite women’s attempts to get themselves out of an uncomfortable situation with verbal and visual clues, sometimes men continue. That’s why so many women related to Sophia Bush’s open letter. She addresses the issue in a mature and polite way, avoiding posting a picture of the man and publicly humiliating him.