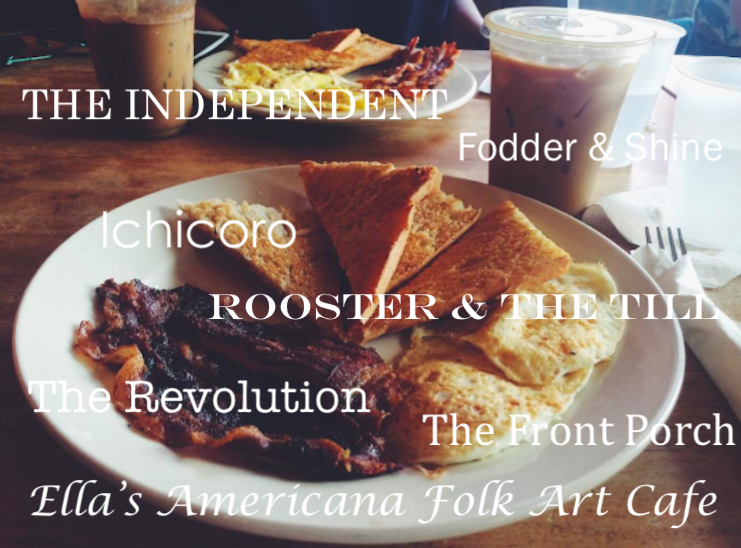 Listed on this photo (credit: Lindsay Calka (used with permission)) are seven notable restaurants in the Seminole Heights area. Many of them are open late and feature live music on specific days.

Hidden between what is commonly known to be South Tampa and North Tampa lies the up-and-coming Seminole Heights neighborhood. Since Ella’s Americana Folk Art Cafe opened in 2009, the area has attracted other ambitious chefs and foodies to open their own unique restaurants. On Florida Avenue, between Sligh and MLK, can be found some of the most interesting and delicious foods and desserts in the Tampa area. Here are some of the hidden treasures of Seminole Heights.

Ichicoro is a ramen place on the corner of Hillsborough and Florida Ave. With a limited menu, customers get their food relatively quickly. The downside- the popularity of the restaurant with the locals results in long waits just to get a table.

Ella’s Americana Folk Art Cafe is known for playing live music on the weekends and creating intrinsically American dishes, from mac and cheese to chicken and waffles.

The February edition of our #IndustryBrunch is ready to roll tomorrow at 11am! Cure that #Superbowl #hangover with our delicacies, cocktails by @redstarrockbar ! Music provided by Dj Tom. Our craft services including #massage , #laundry , and #haircut , so come get #pampered ! And, please, bring your non-industry peoples, especially the kids. All are welcome to enjoy! #industrybrunch #ellasrocks #ellasrocks2017 #ibrunch#brunch @_suzchef_ @[email protected] @[email protected]

The Independent is a relatively small restaurant that is open for most of the day, serving both breakfast and lunch as well as transforming into a bar in the evenings. The menu options are diverse and the food is well made and pleasing to the eye.

Senior Megan Matter said, “They have this pretzel that is so good. It is a hot, home-made pretzel with this side stuff to put on it. They also have really great breakfast.”

I'm playing at The Independent in Tampa with my ruddy brethren Will Quinlan in just a few moments. The dusk is settling in beautifully. #tampa #music #mountainholler #earthfolk #earthfolkcollective

The Revolution is a quaint ice cream shop with a variety of interesting flavors and toppings. Featuring favors such as Blueberry Muffin ice cream with a crumble topping or Cinnamon Bun with a cinnamon sugar drizzle, the shop is worth checking out. It even is registered with UberEats.

Jhuztin Horanzo said, “They have a really cool atmosphere and a lot of unique flavors. They even have local art up for sale.”

We are open till 10 today at Heights and Brandon. P.S. I had to eat this sundae for product control 🍦😁

The Front Porch is a casual American restaurant with undefined hours and a Karaoke night on Thursdays and Saturdays. Menu items include pizza, burgers, and salads.

Sarah Tevlin said, “I used to go a lot a few years ago. I remember the burgers being so good, especially the swiss and mushroom one.”

Open till 2am on Fridays and Saturdays, Fodder and Shine is known for their dinner menu which includes items such as a Frito Pie and Vegetable Pot Pie. They aim to “celebrate the food and drink ways of the South.” They also have lots of gluten free and vegetarian options.

Lunch is happening! Grab the full menu, watch some NFL football and have a great time with us! 🏈🥃🍻🍽🍔 #footballsunday #fodderandshine #seminoleheights #burger #nfl #nflplayoffs #sundayfunday

Rooster and The Till

Established by two young chefs, Ty Rodriguez and Ferrell Alvare, Rooster and The Till creates dishes using locally sourced ingredients. While slightly pricier than other restaurants in the area, this restaurant is where to go if you want to try something new.

Lindsay Calka said, “What’s cool about it is that the food is very very fancy, and the menu changes every night. You usually eat by ordering a bunch of plates and sharing. It’s definitely one of the higher-end restaurants on Florida Avenue.”