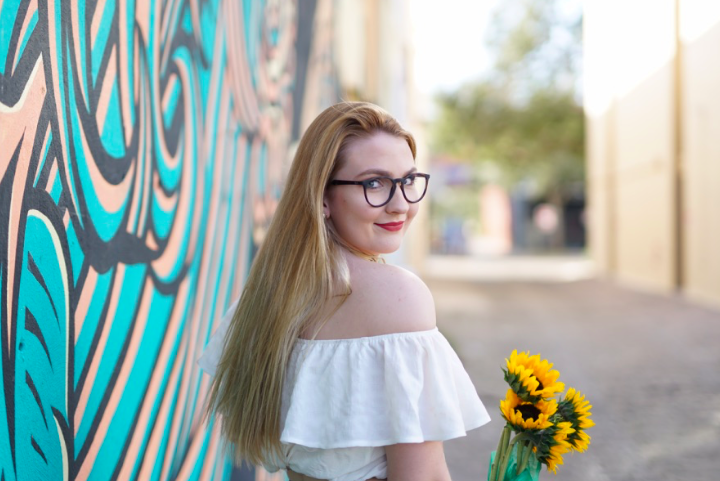 "A fun fact about my dance experience is that I was awarded a scholarship at the Jump dance convention in Miami my sophomore year by Kenny Wormald, the one who played Ren in the 2011 version of Footloose!" Credit: Grace Wipfli (used with permission)

This April, the Academy of the Holy Names Theatre Department, under the direction of Vivian Kimbler, is preparing to perform another spring musical: Footloose.

While faced with a plot of which consisted with primarily male-dominant characters, Kimbler was left with the decision to “gender flip” the show, therefore turning the show’s protagonist, “Ren”, into “Remi”.

Upon deciding to tryout for Footloose, her first Academy theatre production, Junior Grace Wipfli was cast as “Remi”, after winning Kimbler over with her audition song, “For Good”, from Wicked the Musical.

As the year continues to draw closer to April, the Wipfli was able to sit down with Achona and share her unforgettable experience in the production and process of Footloose all in which is leading up to opening night, April 6.

Achona: When did you first start doing theatre?

Grace Wipfli: “I did The Wizard of Oz in sixth grade, but I was in the chorus, so I’ve basically never done theatre. I’ve done a few musical theatre numbers for dance competitions Newsies, Annie, which I think really helped teach me how to act and emote on stage.”

A: What is your background in singing and dance?

GW: “I’ve never taken formal singing lessons and rarely sing in front of anyone. I sang a little bit in middle school as a cantor for mass and I sang The National Anthem once at a basketball game. I’ve only really ever sang in front of my sister and mom, so I’m still getting used to singing in front of people. I’ve always had an interest in singing but I’ve never pursued it until now. I’ve danced since I was three years old taking jazz, ballet, pointe, hip hop, lyrical, contemporary, and a tiny, tiny bit of tap. I danced competitively until sophomore year.  Now, I dance on the Jaguarettes.”

A: What made you want to try out?

GW: “Well, technically one of my best friends, Jaed Seymour, made me try out. We went to see Bye Bye Birdie last year and decided that we would both try out for the play next year together. So, when this year rolled around, of course, Jaed motivated me to do it- and now we’re both involved, as she’s the head makeup artist. Another really influential reason why I auditioned for the play was because of my love for musicals and Broadway which my mom probably accidentally instilled in me. I grew up listening to the Wicked soundtrack, and ever since then, it’s been a really big aspiration of mine to be involved in some sort of show. It’s really great to finally be achieving my goals.”

A: What was it like finding out you got the lead role?

GW: “I was really shocked. Initially, in my audition, I was just going to sing “Happy Birthday”. But, about 20 to 30 minutes before my audition, I changed my song to “For Good” from Wicked. Being that I didn’t have much time to prepare, I honestly thought that my audition was probably subpar. I’ve never done a formal musical before, so I was so surprised that I got the lead. Although shocked, I was incredibly excited and happy. I’m so fortunate to be given the opportunity to take on this role.”

A: What has been the hardest part of being in the play?

GW: “The most difficult part for me so far is getting used to singing in front of people. I have a few songs in the show and it was hard at first to not only pick them up, but also gain enough confidence to sing them in front of everyone- but [Kimbler] really helped boost my morale and prepare me. Either way, everyone in the show is really supportive and great- so I try not to worry about it too much.”

A: What are you most looking forward to about Footloose?

GW: “The thing I’m most looking forward to would definitely be opening night. I’m so excited for everyone to see all the hard work we’ve been putting into the show over this past year. I’ve really learned so much about the theatre and how musicals are produced from [Kimbler] and my peers. There are so many techniques and tips I had no idea about. But more importantly, I’ve really been stepping out of my comfort zone. So, I’ve gained much more confidence in myself.”