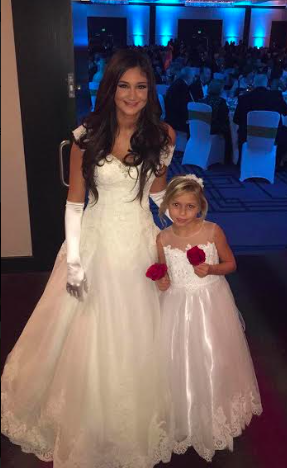 Alessandria Ligori (‘18) recently became a debutante. A debutante ball is an event held for young women who are making their first appearance into society as an adult woman. The term debutante is french for “female beginner.” These young women become debutantes anytime from when they turn 18 to before they graduate from college. Ligori’s father is a Sant’yago krewe member.  Ligori is now a fourth generation debutante. Her mother  and her two older cousins, who all attended Academy, also participated in the debutante ball when they turned 18.

The event includes the debutante’s entrance with  their date, a dance with their father, and the crowning of the king and queen of the Krewe Sant’yago.

Ligori says, “I was nervous about forgetting the dance I had to do with my dad. We are both lacking in coordination.”

Ligori’s date for the night was her boyfriend, Matthew Orta, who entered the ball with her.

“I was also nervous that Matt and I would trip because the white dresses are hard to walk in,” says Ligori.

The traditional debutante ball attire for a debutante is a big white dress with long white gloves. In the Victorian era all ladies participating in the ball  had to wear the white dress to show that they were ready for marriage.  The tradition of wearing these dresses is still alive.

Ligori says, “At first the whole white dress thing was kind of weird because I had to tell the people at the stores that I’m not a teenage bride, I’m a debutante, but I liked being able to look at dresses with my mom and my sister because it was a fun experience to share with them.”