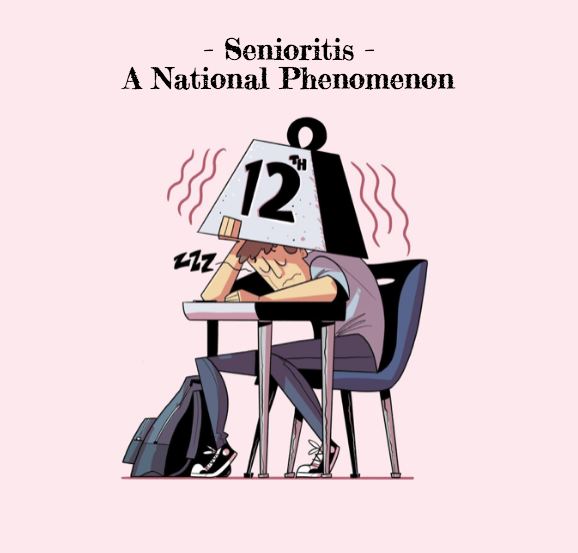 The laid back behavior and minimal efforts made by students during thei last year of high school, known as "senioritis", affects majority of teenagers. However, there is a way to cure its negative effects.

The seemingly inevitable and debilitating “disease”, on average, affects majority of senior classes every year. Common symptoms are described as lack of motivation, exhausted procrastination skills, increased absences, and, most commonly, significantly decreased grades. If a senior has agreed to having any of these signs, they may be infected!

A frequently asked question is why do seniors allow this happen? What is the reasoning behind the sudden halt of self-discipline and control which results in the infamous uncontrollable downward spiral we call “senioritis”? Most seniors claim that the stress of college applications play a large role in the deterioration of their school work and morale, but claim that it comes as a byproduct of their divided attention more so than deliberate actions of disregard.

Nicole Stephan (’20) said, “I never knew how serious senioritis was and how fast it takes over until very recently. All of us are so much more focused on application deadlines, essays, and test scores that it’s almost like regular school gets in the way. Also, with Thanksgiving and Christmas break coming up in a few weeks, it makes school work so much harder to fully tune into.

Although some say the stresses of college are to blame, others say their senioritis is caused by the tiresome final lap of high school as they’re so close, yet so far, from reaching the finish line. Due to this reason, students commonly revert to taking less challenging classes than the previous years in hopes of passing with minimal effort.

However, essentially “skating by” during high school’s last year is strongly advised against, as final grades, good or bad, contribute to the cumulative GPA. common misconception amongst high school is the myth that senior year grades don’t matter, but that statement is not entirely true. If a student, who has already been accepted into college, finishes senior year poorly, they can have their acceptances as well as scholarships rescinded.

Senioritis may sound incurable, but there are many actions students can take to combat and prevent its full effects. Here’s one piece of advice; senioritis cannot be cured overnight. If a student is already feeling its effects, they must take time to retrain themselves to once again perform proactive mannerisms and behaviors. Tips such as setting short term goals and using a planner. College Countdown’s article lists eight effective solutions to get through senior year struggle free.

Alinna Aspiro (‘20) said, “I feel as though our senior class is very strong since it consists of so many very smart and talented people. However, with that being said, I’m pretty sure all of us at one point this year have felt the pressures of school and have somewhat slacked in at least one of our classes. I think that being able to catch yourself when we fall back is an important skill to have in every walk of life, as it shows your determination level.”