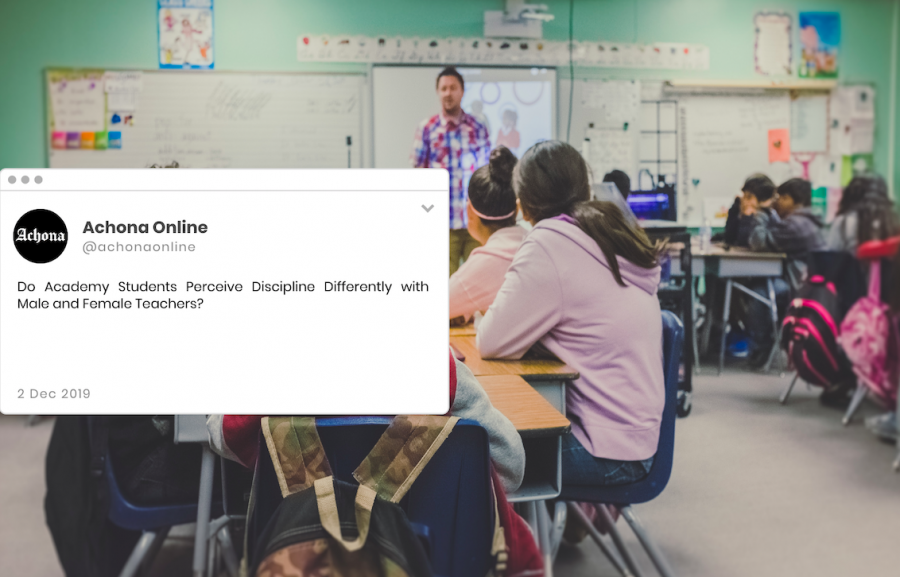 "The environment of the classroom with a male teacher is loose and interactive as they slide in funny jokes to get the class' attention. The experience I have had with male teachers has been good because they put an emphasis on a stress-free environment, but on the negative side, students find themselves getting rowdier and getting off task. I believe that male teachers should keep the balance between a fun and strict environment by doing the following: when the classroom discussion gets off task, use their stern ‘side’ to bring the class back together and remain organized," says Angelie Pena.

Discipline in school and students’ perceptions towards it has evolved throughout the centuries from enforcing corporal punishment to suspensions, expulsions, and simple lectures. For instance, during the 2011-2012 school year for U.S. public schools, 3.45 million students were suspended out-of-school and 130,000 were expelled (according to the U.S. Department of Education).

At the Academy, however, very few students receive detentions or suspensions and even fewer are expelled. Yet, the question many fail to ask is who is giving out these punishments, specifically which gender.

However, according to a study done by John Tierney from The Atlantic, there is a distinct difference between the student to teacher and teacher to student dynamic. He conducted a small survey of 46 of his former students from an all-girls private school near Boston. A recurring topic that emerged from the respondents was that female students respect their female teachers more because “their female teachers commanded more student respect because they were stricter, more demanding, more focused in class, less likely to be nudged off topic, etc.”

But, this begs the question: if students feel this way, how do the teachers feel? Do female teachers recognize or feel as though they can be stricter when teaching their same gender, or do not?

High School Social Studies Teacher Dana Nazaretian, who has taught both boys and girls, says, “I taught in the middle school, and if you had a behavioral problem, it was gonna be in the middle school. I felt like I was evenly the authoritarian for both those genders. I don’t think it makes a difference for me personally as a teacher, but I could see how maybe the girls could interpret that it might be different in high school with all-girls.”

The perils of being a male teacher at an all-girls school http://t.co/ea9RSF0qHn

Male teachers, on the other hand, may appear less intimidating in the classroom as they make jokes and, therefore, create a laid-back atmosphere. To state again, there is a different relationship between male teachers and female students especially at the Academy where there are six male teachers compared to 31 female teachers.

Several students at the Academy, as a result, do not take male discipline seriously because of the persona and atmosphere they have created and thus feel they can get away with more as Lane Hearn (’22) explains, who, to note, currently has Theology Teachers Felix Kalinowski and Brian Butterly as teachers.

In turn, being a male teacher at an all-girls school does affect the way in which they discipline their students. Even simply yelling at the class and, therefore, steering from their easy-going and friendly attitude is a struggle.

Kalinowski says, “For a male teacher to raise his voice all of a sudden scares the girls. I think one of the factors is that we’re at an all-girls school. There is a different relationship between, for example, dad and daughter, and male teachers and females. When I’m talking to the girls, I have to understand that I’m bigger, and I represent males. Sometimes males are seen as overbearing and ‘whatnot’ so I have to show that, yes, we are loving, we are endearing, and we are nurturing.”

However, the question remains — how do male teachers at an all-girls school find balance between being “funny” and “strict” while feeling that they are still getting respect?

Spanish Teacher Jose Ruano says, “I always punish with a smile. It keeps a balance in the class between being really strict and having ‘fun.’ I think it’s important to establish this environment to make the kids feel comfortable in my class, so they don’t come in fearing me because I’m a male and thinking I’m going to start screaming and yelling. I don’t normally scream and yell unless I really have to.”

On the other hand, students need to also respect their teachers regardless of gender or his or her teaching style. “I think that girls definitely do take advantage of the male teachers just because they know that they’re not going to be reprimanded as much as they would if it was a female teacher. I also think girls let it take effect on their grades because they won’t be paying attention in class. However, I think it really depends on the girl because not every single girl will take advantage of a male teacher. I think it just all lays in the student. If the students wants to do their work and do well in the class, then they should pay attention to any teacher for that matter,” says Alexa Groteke (’21).