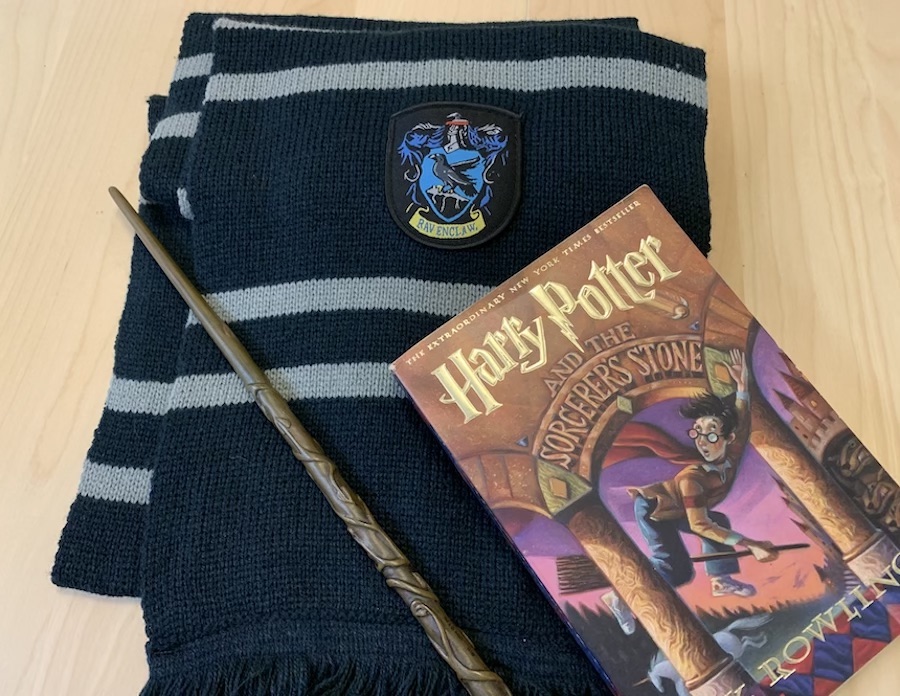 “Time” conducted a scientific-based quiz with nearly 500,000 U.S. responses, and the majority were in Ravenclaw. (Photo Credit: Anika Schmid/Achona Online)

“Time” conducted a scientific-based quiz with nearly 500,000 U.S. responses, and the majority were in Ravenclaw.

When thinking about Harry Potter, most people think of casting spells or long, draping robes. But what made the boy who lived an interesting protagonist? Harry’s identity as a Gryffindor shaped his personality and formed his first friendships in the wizarding world.

In 1997, the world was introduced to the magic and fantasy of J.K. Rowling’s “Harry Potter and the Sorcerer’s Stone,” the first of a seven-book series. At Hogwarts School of Witchcraft and Wizardry, young witches and wizards are sorted into one of four houses: Gryffindor, the brave; Hufflepuff the loyal; Ravenclaw, the wise; and Slytherin, the cunning. The sorting ceremony is a school tradition for first-year students upon their first arrival. The sorting hat is placed on their head and announces their house to the entire school. The students share their dormitory and the majority of classes with their housemates. Friendly rivalries between the houses are encouraged since the house with the most points wins the House Cup at the end of the school year.

After reading the books and watching the movies, fans are eager to discover what house they would belong to, adding to Rowling’s story’s immersion. Hogwarts houses unite fans of all ages and offer companionship between those with similar values and qualities. Fans quiz themselves in many ways, such as the official website, BuzzFeed quizzes, custom quizzes with all the possible official questions (my personal favorite because it provides percentages of results), or simply by self-identification. With each house’s qualities being made clear from the beginning, some fans can easily predict which house fits their personality. However, some find it more challenging to assess where they belong, feeling like they could fit in more than one house.

Launched in 2012 by Rowling, the website Pottermore allowed fans to explore new content and discover their house. Some old features of the website included making potions and dueling to win house points. The website was redesigned in 2015, and in 2016, fans could also find their Ilvermorny School of Witchcraft and Wizardry house, an American school introduced in the “Fantastic Beast” movies.

Pottermore was rebranded into Wizarding World in 2019. The website has quizzes, blog posts, news, collections of Rowling’s writings, a shop, Harry Potter Fan Club, information about all the movies and books, and of course, a sorting quiz. After creating an account, fans can be sorted into a house, discover their wand, and find their Patronus. Fans can also select their favorite things about the wizarding world, such as character, places, food, beasts, and more. This information makes up a Wizarding Passport. There are 28 possible questions on the sorting quiz, but only eight are asked at random. Every quiz asks what pet would accompany the individual to Hogwarts, giving 15 options within three different species: cat, owl, or toad. The questions range from “how would you like to be known to history” to “dusk or dawn.” By evaluating interests and morals, the quiz determines which house best fits the individual. After completing the questions, the website leads the user to a page that declares their house. The only way to retake the quiz is to make a new account.

Alyssa Ellis (’22) said, “I took the Pottermore sorting quiz four times. Three times I got Slytherin, and once I got Gryffindor. I think my house reveals I have strong intuition and set goals for myself. I think the stereotypes about Slytherin can be misleading because they’re depicted as ‘evil’ because many dark wizards/witches came from that house, but they’re not all insensitive and lack morals. However, I agree that Slytherins tend to put themselves first and speak their mind, and sometimes they can take it too far and become too confrontational and hurt peoples’ feelings.”

After downloading the Wizarding World app and signing into their account, fans are given the option to retake the sorting quiz. The app provides an interactive quiz with new visuals, augmented reality, and selfie mode to place the Sorting Hat on their head. This quiz asks a total of eight questions, and they are the same as the ones offered on the website. If an individual is not satisfied with their new result, they can stay in their previous house. The quiz can be retaken as many times as wanted, but the hat will not change its decision.

No matter what quiz is taken, many individuals feel discouraged if they do not receive the result they want. While this is a valid cause for frustration, it is important to erase any misconceptions and negative bias about the houses that could cloud their judgment. Fans should respect each other’s houses, even if they feel the characteristics associated with that house differ from their own values.

The book series is written from a Gryffindor’s perspective, which showcases them as the stereotypical good guys who are chivalrous and brave. Harry Potter, Ron Weasley, and Hermoine Granger’s placement in this house resulted in Gryffindor’s glamorization as the most impressive house. Gryffindors are passionate about justice, trustworthy, honest, and stubborn. All Gryffindors are not necessarily arrogant and impulsive, but some can be irresponsible. Not every Gryffindor is a fearless hero, since Peter Pettigrew betrayed his friends out of cowardness. Throughout his school years, Neville Longbottom feels out of place and wishes he were in Hufflepuff instead. His timid and shy nature contrasted with his Gryffindor peers. Despite his insecurities, Neville was incredibly courageous when he defeated the snake, Nagini, and continuously proved his worth by protecting his friends.

Unfortunately, some fans see Hufflepuffs as leftovers and believe that anyone in this house is not brave, smart, or cunning. As the underdog, Hufflepuffs are looked down upon as soft and weak, but this is a false assumption. Hufflepuffs are cautious, humble, and the most accepting and tolerant house. Despite their carefree and optimistic personalities, they are not all “sunshine and rainbows,” as some can be very competitive and will express their negative emotions when needed. Nymphadora Tonks was clumsy, friendly, and bubbly and used her appearing-changing Metamorphmagus ability to make others laugh. She fell in love with Remus Lupin, a man who considered himself unlovable due to his werewolf nature. Tonks demonstrated her incredible dedication when she fought in the Battle of Hogwarts after recently giving birth to her son. Due to his awkwardness, Newt Scamander from the “Fantastic Beasts” film series felt more comfortable around magical creatures than humans and dedicated his work towards their protection. Just like Newt and Tonks, Hufflepuffs are patient, loyal, dependable, hardworking, and compassionate.

Elise Favret (’22) said, “I’m a Hufflepuff, according to Pottermore. My wand is a pear wood with a phoenix feather core, ten inches and reasonably supple flexibility, and my Patronus is a husky. I only took the Pottermore test once, but I definitely used to think I was a Ravenclaw. I think I’m more of a mix of the two. I agree with the Hufflepuff traits of loyalty and a strong work ethic for sure. I think the stereotype of Hufflepuffs being the worst house or being weak is unfair. I just think it was the least mentioned in the series, and so people ignore it. Also, it’s ‘cooler’ to be in Gryffindor and be daring or Slytherin and be ruthless, and so I think people would rather be in those houses because they think they are ‘better’ in some way.”

Ravenclaws are often associated with their intelligence and narrowed down to the singular trait of being smart. Not every Ravenclaw enjoys spending time in a library or loves to study. To be good at something, they must be interested and passionate about it. Ravenclaws are not flawless either. They make mistakes like everyone else and tend to procrastinate, choosing to spend their time on other interests. Ravenclaws are perceived as emotionless, but they are expressive people, even though they may not be the best at expressing their emotions. Gilderoy Lockhart is an example of a dishonest and manipulative Ravenclaw who used others’ knowledge to gain fame. On the other hand, Luna Lovegood was a bright girl who was determined to live her life without caring what others thought. She was optimistic and had many quirky beliefs that set her apart from others. Other traits of Ravenclaws include individuality, wisdom, creativity, and wit.

“I think that Ravenclaw matches my personality fairly well, but I can also see myself as a Slytherin. I enjoy learning for the sake of learning, and I find taking in new information to be interesting. However, I also have ambitions and can be cunning when I need to be. I think that the stereotype surrounding Ravenclaw is that it’s the smart person or nerd house, but all you really need is a true love for discovery,” said Madison Kwo (’23).

The most common stereotype surrounding the Slytherins is that they are evil. Harry begs the Sorting Hat not to sort him in Slytherin after learning that Voldemort, the wizard who killed his parents, was in that house. From the very beginning, Slytherin is portrayed negatively since most villains come from this house, including Bellatrix Lestrange and the Malfoy family. However, the majority of Slytherins defy the stereotype of evilness. Regulus Black was a former Death Eater, but he selflessly sacrificed his life to prevent Voldemort from obtaining a Horcrux. Horace Slughorn, head of Slytherin House and Potions professor, acted as a supportive mentor towards Harry and dueled against Voldemort in the Battle of Hogwarts. Slytherins are not coldhearted and cynical; they simply focus on their goals and display tremendous amounts of determination. The assumptions that Slytherins oppose the opinions of others and are disloyal are false. Members of this house are known for their adaptability, ambition, and boldness.

Morgan Perry (’23) said, “My Hogwarts house is Slytherin. I found out by taking the official Pottermore quiz and the one that consists of all the Pottermore quiz questions. I have taken the other two potter more quizzes as well. I have taken it several times over the years, and it changed from Ravenclaw to Slytherin. I believe my house matches my personality because I am loyal to my friends, have ambitious goals, and am cunning when needed.”

The most reliable way to discover a house is by the official quiz, but remember not to feel discouraged if your result is not what you expected. To better understand how much of each house makes up your identity, I recommend completing the extended quiz with all 28 questions.

And as Tessa Netting, an avid Harry Potter YouTuber and a proud Ravenclaw, once said, “If you truly believe in your heart that you belong in a specific Hogwarts house, then you should be in that house.”