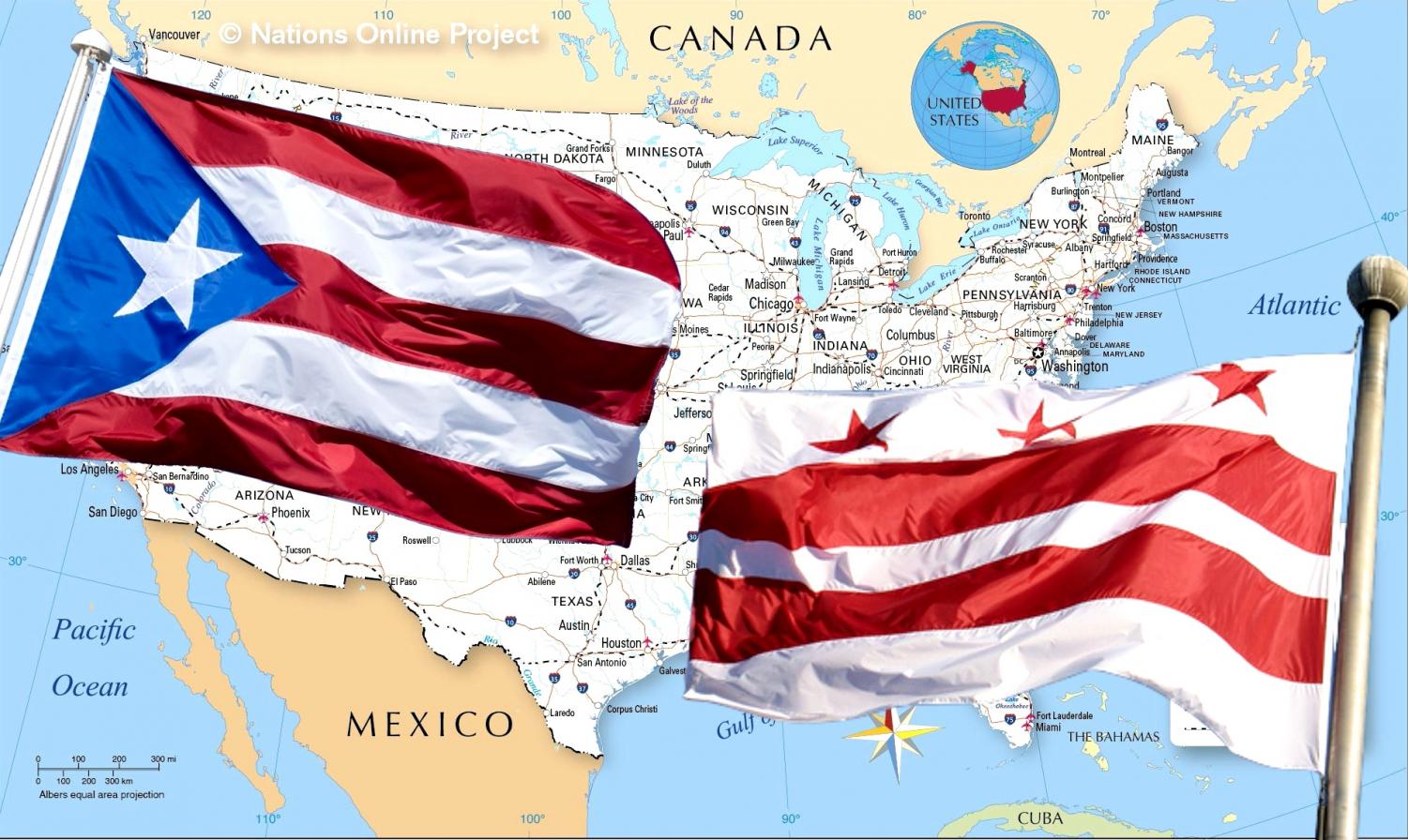 A recent bill for D.C. statehood passed in the House has sparked a widespread debate. ((Photo Credit: Katia Huddleston/Photoscape/Achona Online))

A recent bill for D.C. statehood passed in the House has sparked a widespread debate.

Should Statehood Be Granted to Puerto Rico and D.C.?

It’s been over sixty years since the U.S. last ratified the addition of two new states, Alaska and Hawaii, and some argue it’s time to do the same for two other U.S. owned lands: Washington D.C. and Puerto Rico.

Despite being less than 62 square miles in total land area, DC houses 711,000 residents, putting them at a larger population than both Wyoming and Vermont. Although D.C. residents are U.S. citizens, they are only granted a single non-voting representative in the House of Representatives. Seeing as D.C. residents pay the highest per-capita federal income taxes in the U.S., many see D.C.’s predicament as a form of “taxation without representation.”

“I wouldn’t speak for anyone who lives somewhere else,” says Social Studies Teacher Stacy Filocco. “Our government was founded on the idea of representation and the needs of those people are reliant on Congress members who don’t live there.”

“I think that DC should be a state because they have votes in the electoral college and the people living there are taxed but do not have representation in Congress,” says junior Shelby Drinkwater.

However, organizations like the New Columbia Statehood Commission don’t exactly have the rest of the American people on their side. A 2019 poll found that almost two-thirds of Americans don’t want statehood granted to D.C. And, despite the efforts of various organizations, some feel it’s simply down to the constitutionality of the idea.

Firstly, the Founding Fathers never intended for D.C. to become a state and have its own functioning legislature. In fact, they made it a point to say that Congress has the exclusive right to exercise power over the “Seat of Government,” or, the capital city. They intended it to be a neutral place where senators and representatives of all states could meet without bias.

The Consitution also prohibits a “seat of government” that exceeds 10 square miles. However, a new bill, which passed through the House in June, proposes carving out a federal enclave that consists only of the Capitol Building, US Supreme Court Building, White House, and other federal buildings and monuments. In this way, the federal enclave, which wouldn’t exceed 10 square miles, would become the U.S. capital and the surrounding area would become the Fifty-First state. Nevertheless, another issue would then arise as to whether the Twenty-Third amendment should still apply to the newly carved-out capital.

“We’ve changed our interpretation of the Constitution often. Residents of D.C. are subject to the same laws without proper representation in Congress,” said Filocco.

Because the whole purpose of making DC independent of any state was so that states would not have power over the federal government located therein (see Article 1, Section 8, Clause 17). If you want DC to belong to a state, DC can always join Maryland or Virginia. https://t.co/YlJZpK0ndc

Puerto Rico is in another boat entirely. Unlike DC, Two-Thirds of Americans believe that Puerto Rico should be a state. The Caribbean territory has nearly 3.2 million people living there, and despite being subject to federal laws and contributing yearly to the federal treasury, Puerto Ricans are left without a say in who should lead the federal government.

While Puerto Ricans are U.S. citizens, many argue that to accept the territory as a state would be another weight added to the U.S. treasury’s shoulders. Puerto Rico is nearly $74 million in debt and has $50 million worth of unpaid pension obligations. This, along with the fact that Puerto Ricans do not pay federal income taxes, causes many to believe that the burdens outweigh the benefits.

The Island voted for statehood three times since 2012 and has officially requested statehood. Is it really unclear what Puerto Rico wants? https://t.co/NbDRfPAhJA

However, a majority of Americans disagree. They believe that adding Puerto Rico as a state would be beneficial to the economies of both the U.S. and Puerto Rico. Puerto Rico lacks the sufficient federal funding of states to create jobs, leaving 43% of Puerto Ricans below the poverty line. If Puerto Rico were to become a state and receive more federal funding, the government there could employ more residents, increasing their income levels and putting them at the level to pay federal income taxes.

“The reason that they’re in debt is mostly U.S. policies,” said Filocco. “The United States has made laws like the Jones Act that seriously impact the cost of living and economic opportunities.”

Puerto Ricans do, though, risk losing parts of their native culture if granted statehood as seen in Hawaii and the states acquired in the Mexican Cession.

“There will be some positive economic impacts, but at what point will that become a burden to the people that live there?” asked Filocco. “There are potentially more job opportunities, but as it becomes a more favorable location for mainland Americans, it would subsequently drive up prices for people who live there.”