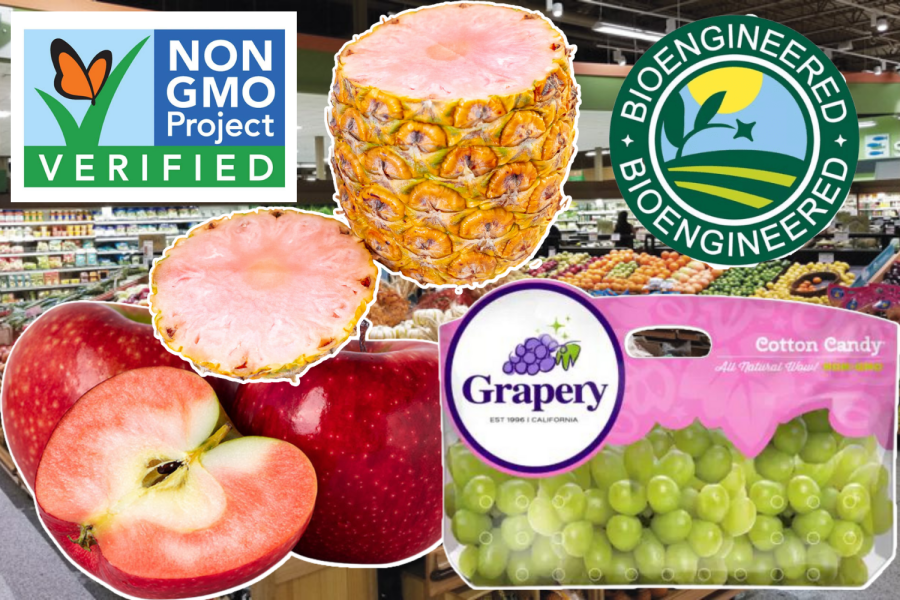 Products such as pink pineapples, Lucy apples, and cotton candy grapes trend for their unusual flavor and taste.

Genetically modified organisms (GMO) became popular starting in the 1990s. Scientists used genetic modification to engineer plants to have natural pesticides and grow seasonal foods year-round. GMOs have expanded from a method to assist farmers to experiments with the design and flavor of fruits.

GMOs have been used to develop fruits with specific traits, such as Del Monte’s new pineapple, called the Pinkglow. The Pinkglow looks like a regular pineapple on the outside, but contains pink flesh on the inside. This pineapple trended in 2016 and is now having a revival in 2022, with Tiktok users posting themselves sampling the fruit. The Pinkglow is said to have less acids than a regular pineapple along with a sweeter taste.

Kamila Muraharisetti (‘24) said, “I had [cotton candy grapes] a long time ago. They tasted like regular grapes but sweeter.”

These genetically modified fruits have become normalized as more hit the market. However, some people are concerned about the development of GMOs. GMOs have faced backlash since they were first developed, as consumers believed that they were  bad for their health and damaged the environment. Critics claim that GMOs can cause harmful genetic changes and a loss of nutrition and contain toxic chemicals.  “Medline Plus” states that “these concerns have thus far been unfounded. None of the [GMOs] used today have caused any of these problems.” The US Food and Drug Administration checks all GMOs for safety before they are put on the market. Yet, their negative perception has persisted.

Working on a blog post about the importance of buying Organic & Non GMO. And while researching, it’s so much worse than even I knew what they’re doing to our bodies with these GMOs.

The trending genetically modified fruits have shown to be just as or more beneficial than the regular fruits. Cotton candy grapes can help lower blood pressure and alleviate inflammation. They also carry the same nutritional value, but can be more appealing to children with their candy-like taste. The Pinkglow pineapple has the same nutritional benefits as a regular pineapple.

Fruits are part of a major food group with vegetables, and are integral to a healthy diet. Fruits that have a better aesthetic and flavor, such as many GMOs, could benefit the health of people, as the greater appeal of purchasing aesthetically pleasing foods allows people to receive health benefits from foods they would not usually buy.
@salad.gold Does it taste like cotton candy?🧐. #fruit #fruits #testingproducts #pinkpineapple #tryingnewthings #vegan #vegantiktok #Sing2gether ♬ Similar Sensation (Instrumental) – BLVKSHP

The appeal of these fruits is seen through the public’s online response. The trending fruits have great appeal as people are eager to try them and post them on Tiktok or Instagram. Trends can cause people to purchase items they wouldn’t usually buy, which is shown as users make videos titled “Things Tiktok Made Me Buy.”

Sophomore Sofia Bailey said, “There are stories about [altered fruits] so people get them to know if the things they hear are true. For example, there was a rumor that white strawberries taste like chocolate strawberries. I eat them and they taste like regular strawberries but are more sour and flavorful.”

These altered fruits have shown to be more similar to regular fruits than people realize. People may see an unnaturally colored fruit or non-browning apple as a dangerous science experiment. This has been contributed to by the stigma around GMOs. However, science has proved that these genetically modified fruits may be better than regular fruits. Personal preference and aesthetic can lead people to want to purchase a colorful or sweeter fruit rather than a plain one. The appeal of having an unusually colored pineapple on their Instagram feed could lead to people improving their health in small, simple ways.