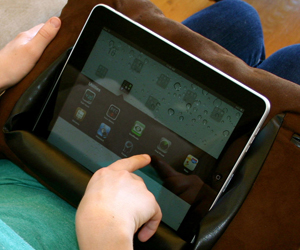 This year, Santa (and everybody else) wants a laptop, iPad or Xbox 360.

While the overall economy remains sluggish, surveys suggest holiday spending on consumer electronics could be higher than ever.

According to the Consumer Electronics Association, Americans are planning to spend an average of $232 a person on tech gifts this year, or about 31 percent of their total holiday gift budget.

Last year, shoppers spent $222, or 29 percent of their gift budget, on gadgets.

“Almost a third of holiday gift budgets will be spent on (consumer electronics),” said Steve Koenig, director of industry analysis at the association. “I think there’s a great deal of optimism out there for holiday, and research shows consumers are at least planning to spend.”

Even that higher spending won’t be enough to pay for all the tech goodies Americans say they want to find under the tree this year.

The Consumer Electronics Association found that the No. 1 holiday gift request among U.S. adults this year is peace and happiness.

With their consciences satisfied, Americans then said they most wanted a laptop computer, with Apple Inc.’s iPad tablet in third place.

E-readers and video game consoles also made the top 10 list.

Even with gadget spending predicted to rise, many of the most-requested gifts have price tags well above that mark.

Game consoles also can be pricey, with the least-expensive models starting at $199 new.

But there are options in those categories even if you can’t afford top of the line hardware.

For example, GameStop Corp. is selling refurbished Xbox 360 systems that are guaranteed to work for just $99.

And Barnes & Noble Inc.’s Nook Color, a 7-inch e-reader/Android tablet, runs $249, although supplies of that device could be tight this holiday season.

But don’t expect the best deals to be held back until the last minute on Christmas Eve.

Koenig said many retailers this year are switching strategies and are now trying to pull bargain-hungry shoppers into their stores as soon as possible.

“In some cases, we have programmed customers, figuratively speaking, to wait for the deals, because they know the prices are going to come down,” Koenig said.

Retailers are “doing what they can to pull forward some of those purchases instead of having them wait,” he said.