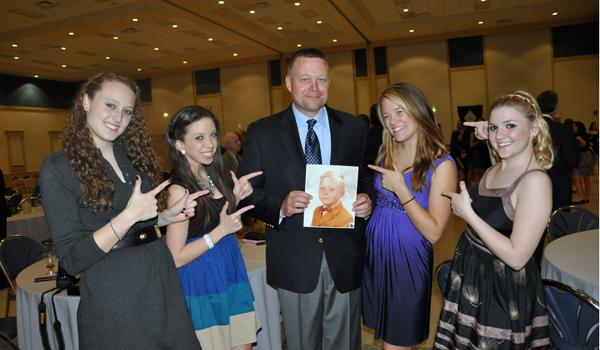 This year’s “Knight in Shining Amor” themed Father- Daughter Dinner and Dance, held January 21, was fit for a king. Academy girls posed for professional photos with their dates, chatted with friends and fathers, and enjoyed the live jazz band. The Brady Center’s festive mood and medieval decorations transformed the cafeteria into a memorable night.

As desserts were finished, India Hayes and her father Mr. Stephen Hays were the first on the dance floor. The band played smooth jazz and covered many classic party hits such as Earth Wind and Fire’s “Dancing In September” and the “Electric Slide.”

The event coordinator, Sarah Norris, was beaming the whole night, clearly pleased at yet another successful Father-Daughter Dinner and Dance. “It was awesome,” she said shyly, “and the committee this year was great.” Junior and committee member Sumble Sadiq added, “The decorations and live band put the finishing touches on our highly anticipated event.”

Once again, Student Council Moderator Mrs. Jenny Van Pelt and Council members organized a lovely evening that allowed Academy girls of all grades to honor their fathers and share important memories together.