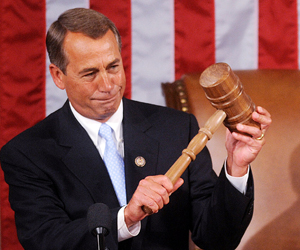 WASHINGTON — Rep. John Boehner was sworn in as the 61st speaker of the House of Representatives as Republicans took control of the chamber Wednesday. He pledged to make the House “honest, accountable and more responsive” to the needs of the American people.

Rep. John Dingell, D-Mich., the dean of the House and its longest-serving member, swore in the 20-year Ohio congressman after he defeated the outgoing speaker, Nancy Pelosi, in a 241-173 vote.

“The American people have humbled us. They have refreshed our memories to just how temporary the privilege of serving is. They have reminded us that everything here is on loan from them,” Boehner said, waving the symbol of his new office. “That includes this gavel, which I accept cheerfully and gratefully knowing that I am but its caretaker. After all, this is the people’s house.”

In introducing the new speaker, Pelosi, D-Calif., used the bully pulpit to praise the actions she helped push through the previous Democratic-controlled Congress.

She touted her efforts on behalf of children and families. “We have stood with children,” she said, citing the improvements in the “safety of the air they breathe, the water they drink and the food they eat.”

She also mentioned the health care reform legislation, which Republicans have pledged to repeal.

Pelosi also sounded the themes that Democrats have said they will push in the new Congress: creating jobs, strengthening the middle class and “reducing the deficit and not burdening future generations.”

She handed the gavel to Boehner, who dabbed his eyes with a handkerchief to wipe away tears, which have become his trademark.

“I pass this gavel and sacred trust that goes with it to the new speaker,” Pelosi said. Boehner then hugged her.

The vote for speaker offered signs of a continued rift among Democrats, with 19 members of the caucus voting either present or for other lawmakers, including 11 for Rep. Heath Shuler, D-N.C., a leader of the moderate Blue Dog Coalition. Shuler lost out to the more liberal Pelosi in the caucus race for minority leader, 150-43.

In the Senate, where Democrats hold the majority, 53-47 (including two independents who caucus with them), Vice President Joseph Biden swore in 35 new and re-elected senators before galleries packed with spectators, including family members, former senators and other dignitaries.

After the perfunctory pledges of cooperation, partisan sniping got under way fast.

Senate Majority Leader Harry Reid, D-Nev., called on his colleagues to consider changing the filibuster rules that require 60 votes to enact controversial legislation, complaining that the filibuster has come to be “abused in truly unprecedented fashion.”

“Rather than offer amendments to improve legislation or compromise for the greater good, as members of this body have done for generations, the current minority has offered amendments simply to waste time, delay us from proceeding to a bill, or to score political points,” Reid said.

Minority Leader Mitch McConnell, R-Ky., whose party has used the filibuster to block legislation, urged Democrats to use the opening day of the new Congress to “renew our purpose and our commitment to bipartisanship, not to double down on a partisan approach that has too often marred lawmaking in Washington over the past two years.”

Citing the November election of a new Republican majority in the House, McConnell said, “The big changes today are of course happening across the dome, and I’d like to welcome the many new Republican members of Congress who’ve come to Washington to change the way things are done around here.

“I wish them great success in achieving the kinds of reforms and policies the last election was all about,” McConnell added. As for the Senate’s Republican minority, he said, “We will press the majority to do the things the American people clearly want us to do.”

Senators from both parties paid tribute to Sen. Barbara Mikulski, D-Md., for becoming the longest-serving female senator in history, surpassing Sen. Margaret Chase Smith, R-Maine, who served four terms until her defeat in 1972. Mikulski, sworn in for her fifth term Wednesday, was first elected to the Senate in 1986.

Boehner, 61, has repeatedly said he wants to make the legislative process in the House more transparent while giving members a greater opportunity to help craft legislation. Pelosi was sometimes criticized for centralizing too much power in the speaker’s office — although her advocates say that she was simply following the same playbook used by the GOP when it last ran the House.

But the challenges of governing and holding a perhaps fractious GOP caucus together may clash with Boehner’s stated goals of a more open and inclusive process. Already Democrats are slamming next week’s expected vote in the House to repeal the health care overhaul legislation because Republicans are not going to allow the repeal bill to be debated and amended.

“Republicans have now broken at least three of the pledges they made in the election,” Democratic National Committee spokesman Brad Woodhouse said Wednesday.

Beyond the health care repeal, Woodhouse cited the House GOP’s move to exempt the proposed repeal from a requirement that legislation that increases the federal budget deficit be offset by spending cuts elsewhere. (Proponents of the health care law say it will reduce the deficit over the next 20 years.) The GOP may also be backing away from a pledge to slice $100 billion from the budget for the current fiscal year because a quarter of the year has almost passed.

Boehner and dozens of other lawmakers spent the morning at a private bipartisan prayer service at St. Peter’s Catholic Church on Capitol Hill. In her last hours as speaker, Pelosi read from the New Testament, as did GOP Rep. Jeb Hensarling of Texas. Programs handed out at the door tried to inspire with meditations on leadership.

“Somehow we will discover that we are made to live as brothers,” read one quote from Martin Luther King Jr.

The pews were full of many new lawmakers and their families. Afterward, incoming Rep. Bobby Schilling, R-Ill., corralled his 10 children for a photo on the steps. A gaggle of Boehner relatives in from Ohio — each wearing nametags — were ushered on to bus marked “VIP services.”

The cheery atmosphere was quickly interrupted by a noisy fixture of modern-day politics. As members left the church, an anti-abortion activist held a large, graphic photo of a fetus as another yelled through a bullhorn, “Will you use your power to defund Planned Parenthood?”

Merrie Turner, an anti-abortion advocate from Washington, was dressed as Betsy Ross; her companion was decked out as George Washington. They aren’t “tea party” activists, she noted. “I would like to see more talk of life issues than taxes,” she advised the new Republican class. “The economy will fall into place if we get our godly priorities right.”

Later Wednesday, the House is expected take up a rules package that includes a requirement that all legislation cites its constitutional authority.