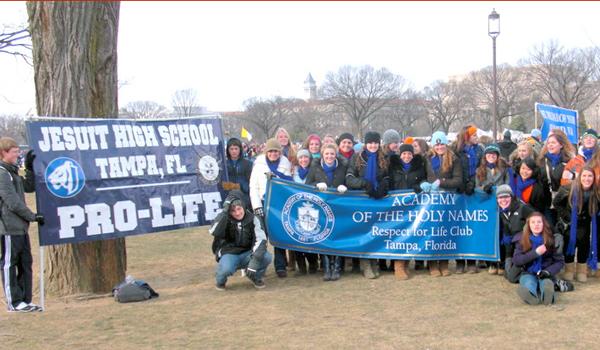 Everyone who has seen Juno knows that “All babies want to get borned!” but few have seen the direct implications of abortion on both the baby and the mother. The concern for the unborn’s right to life has inspired Academy girls over the years to attend with their parish youth groups the annual March for Life in Washington, DC.   However, for the first time ever, Academy girls organized their own trip this year.

On January 24, twenty-seven members of Academy’s new Respect for Life Club braved the below-freezing weather to attend the 38th annual March for Life in Washington D.C. An estimated 400,000 people marched to the Supreme Court in protest of the legalization of abortions through the 1973 Supreme Court decision, Roe v. Wade.

After arriving in D.C. on Friday, January 21, Academy attendees were ready to fight for every human’s inherent right to life.    At the March for Life Conference, the club members attended a presentation of  Life After Abortion, a documentary about the hidden agenda of abortionists and the emotional and physical side effects of abortion. Through the sad accounts of women who had aborted a child, the viewers learned of the many side effects, including infertility, emotional trauma, partially effective abortions, and even death.

Freshman Maddie Cassidy  expressed her shock after the presentation.  “I’m amazed at the number of simple facts that are hidden from society and the women who make this ‘choice.’ How can something be called a choice when they don’t know what they are really choosing? The abortion industry isn’t about women or their health; it’s about revenue. This lust for money is clearly seen through the injustices of the abortion facilities.”

In addtion to visiting some of D.C.’s historic attractions, the students also attended a Mass for Life at the Basilica of the National Shrine of the Immaculate Conception, which is close to Catholic University.  Here the National Catholic Register recorded 11,000 present at the Mass, including five cardinals, 41 bishops, 325 priests, 95 deacons, 570 seminarians and 65 altar servers.

Katie Martin, President of the Academy Respect for Life Club, said, “I felt one of the most meaningful aspects of the trip was going to Mass with everyone at the Basilica. It was amazing to see thousands of high school and college-aged kids united in this cause. Prayer is a powerful thing. If we hope to change the hearts and minds of our country, one of the most effective ways to accomplish this is through prayer. I thought the Mass was a truly moving and inspirational experience.”

The next morning, the marchers prepared for the Official March for Life. The day began with a visit to the Appropriations Committee Room for the House of Representatives. Here, Academy students met with Congressman Bill Young’s legislative aide, who explained the ins and outs of legislation regarding abortion policies. Next, the Academy of the Holy Names representatives left for the Rally for Life by the Washington Monument, where they heard from a record-breaking 53 members of Congress, according to the March for Life Organization’s official web page.

At the March, the attendees mingled with students from various high schools, colleges and right- to-life clubs from across the nation.  They even bumped into an Academy alum from the Class of 1978, who excitedly exclaimed, “That’s my ring!” The girls proudly regaled her and her children on the steps of the Capitol with the Academy Alma Mater.

Senior Taylor Trayner said, “The March for Life was an experience that I will never forget. Being surrounded by so many people who share the same belief as mine was invigorating. Never before had I realized how important peaceful protest is in order to stand up for your rights, especially the most essential right to life. And then, seeing a graduate of the Academy of the Holy Names made me feel so proud to be representing my school. She was living proof that Academy graduates continue on to better the world.”

All of the girls agreed that the trip was an experience to treasure, especially the memory of serving as the first March for Life group from Academy and the memory of holding their banner along with an Academy graduate.

The trip ended with a picture on the steps of the Capitol with Congressman Bill Young and a mad dash to the airport. The March inspired many of the attendees to write to their Representatives and Senators with their views on current abortion legislation, on the state and federal level, as well as to educate their communities about the facts about abortion procedures.