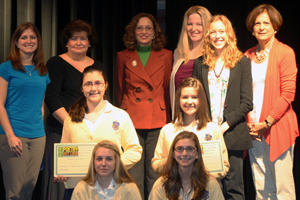 In the midst of the excitement of Academy’s Catholic Schools Week, four grade-level finalists battled for first place in the Second Annual Poetry Out Loud (POL) competition on Wednesday, February 2, in Brady Center North.

Selection for finalist competition did not come easy. The girls faced tight competition in mid January in each of their English classes, in which all students were required to memorize and recite a poem from the POL anthology.  Then the top five students from each grade 9-11 had to  face off at lunchtime  competitions that ran over four days beginning January 18.    Ms. Rotolo, Academy’s drama teacher, acted as the grade-level judge for all grade-level competitions with each of the English teachers serving as accuracy judge for her grade level.

Sophomore finalist Lauren Collins admitted before the competition, “I am so nervous but really excited at the same time.”

The winner Christine Costello will compete in Tallahassee on Saturday, March 12, at the State Poetry Out Loud competition.  Christine has selected “Invictus” by William Henley as her third poem for recitation. The winner at the state level will receive a cash prize and a trip to Washington, D. C., to compete in the national final on April 27.