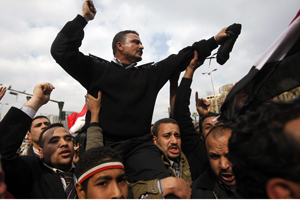 CAIRO — The Egyptian army has tightened its grip over the country by suspending the constitution, dissolving parliament, and calling for elections within six months, key demands of the protest movement that ousted President Hosni Mubarak.

The actions by the Supreme Council of the Armed Forces came two days after Mubarak resigned and were an indication to protesters that the military, the most respected institution in the nation, was edging toward forming a credible democracy. However, the army left intact the ex-president’s council of ministers to run the government.

The steps Sunday showed that the nation’s generals, who took power as Mubarak stepped down, were trying to navigate a precarious course between asserting military authority and addressing the issues that drove protesters into the streets.

Reformers and demonstrators welcomed the army’s intervention as a signal that after 30 years of dominance and corruption by Mubarak’s ruling party, independent candidates and opposition voices would potentially gain a voice in a future government. In many countries such a gambit by the military would invoke concern, but Egyptians have grown to trust the army more than politicians and other state institutions.

“It’s a move toward a transition to democracy that the army had emphasized in earlier statements,” said Nabil Abdel Fattah, a political analyst. “It’s a guarantee the military is moving closer to a real parliamentary state.”

Earlier Sunday, the military moved into Tahrir Square, the epicenter of the uprising in Cairo, and began to clear out the tent city that had sprung up since the revolt against Mubarak’s rule began Jan. 25. Demonstrators largely did not resist their efforts, though small groups remained in the plaza.

Protesters and opposition leaders had been demanding that parliament be dissolved and that the constitution be reformed to curtail the power of the president and allow wider political freedoms, including repealing laws that limit independent candidates.

Those limitations and intimidation by security forces allowed Mubarak’s National Democratic Party to sweep parliamentary elections in November. The elections were widely condemned as rigged for excluding candidates from the Muslim Brotherhood and other opposition groups. The outrage over the November poll was one in a string of triggers that led to the uprising and eventually toppled the Egyptian leader.

Some demonstrators had expressed concern that an increased military role might threaten civil rights and delay reforms and new elections.

But political analyst Diaa Rashwan noted: “If the army had wanted to take over the country, they would have already. So far, it has only been the army that has listened to the demands of the protesters and acted upon them.”

The effort to clear Tahrir Square was a further sign of the military’s determination to restore normalcy to the nation’s capital. The popular uprising shut down Egypt’s economy, sparked clashes and froze activity in downtown Cairo, home to the government and major businesses.

Cars honked and drove around the city hub for the first time in more than two weeks as scores of soldiers fanned out into the remaining tent cities on the square and unceremoniously tore them down.

The families and young people, who had been camped out there, mainly complied and accepted that Tahrir Square no longer belonged to them. The soldiers dismantled the plastic tarps and walked among strewn papers, trash and a child’s lost teddy bear. One teenager shoved and pushed at the soldiers and cried at having to leave.

A protester who was evicted warned that if the demonstrators’ surrendered Tahrir Square, the army would never meet the Egyptians’ demands for greater democracy and an end to decades-long emergency decrees.

“We don’t want to leave,” said Mohammed Shaheen. “They’ll never give up the emergency laws. And they’ll use them to put people in jail.”

Meanwhile, in a strange twist in a country where everyone feels victimized, several hundred police officers held a protest of their own in front of the Interior Ministry demanding higher salaries, access to government medical care and rehiring of officers fired for disciplinary or administrative violations.

The officers also called for former Interior Minister Habib Adli to be held accountable for denying them raises and benefits. Adli is under investigation for alleged financial crimes and running a police and domestic intelligence force that was criticized for torture and human rights abuses.

In the early days of the anti-government demonstrations clashes between protesters and police left several dead and many injured. Long before that, the police have been considered one of the main sources of the daily cruelties, indignities and demands for bribes suffered by Egyptians.

But on Sunday police officers said they too were oppressed under Mubarak’s regime and explained that they pressed for bribes to supplement their salaries, which for some can be as low as $50 a month.

“When there is corruption in the government, he gets no money, he has to get his money from the people,” said Sherif Katib, second in command at a police station in El Minya. “If I don’t have my rights, I will rob. Rob from the people.”

Katib and many others blamed the government for pitting the people against the police. “We are countering the image, it was said in the foreign media that the police are abusing people,” said Ahmad Ali, an officer in Cairo. “The police are from the people.”

Police officers passed through Tahrir Square before gathering at the ministry, drawing chants of “the police and army are one” from supporters and anger from others in the crowd. One young man tried to charge at them. “The police killed us! Don’t believe them,” he shouted, before a group pulled him back.

Several hours into the police protest, an army officer read a response from the ministry to their demands: their three-month bonuses would be doubled, all officers expelled for disciplinary and administrative violations would be rehired and they would get access to the police administration hospital. Initial cheers were replaced with grumbling that their request for a pay increase was not answered.

“All this is words on paper,” said one man who gave his name as Abu Lujayn. “We need higher salaries so that we don’t extend our hands.”

(Amro Hassan of the Times’ Cairo Bureau contributed to this report.)