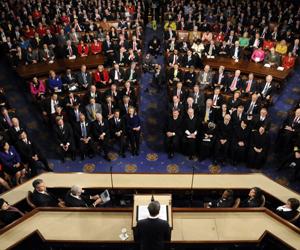 Just five days after his two-year presidential anniversary, President Barack Obama addressed the nation during the State of the Union. Prior to January 25, many Americans anticipated the President’s yearly address in the hope he would provide solutions for the growing deficit, job shortages, and the government’s plans for the future.

Public opinion has shown that the American people expect not only a change in current legislation, but also expect both Democrats and Republicans finally to start working together to fully represent the people’s wants. Because of  the people’s demand for change, President Obama crafted a bipartisan address to prove how both parties can attack the fiscal issues as well as broaden the hopes of the American people.

Unlike his two previous speeches, President Obama faced a predominantly Republican House and Democratic Senate. Even though Congress usually splits between party lines, members of both the House and Senate decided to show their allegiance to work together by sitting intermingled among  each other instead of seating themselves on their respective sides of the aisle.  In this spirit of unity, all members honored Arizona Representative Gabrielle Giffords by wearing a black- and- white ribbon and left an open seat in her memory. The President symbolically showed his promise to work with both parties by cleverly mixing the Republican red and the Democrat blue into his purple tie.

This new partisan allegiance resulted in a warm welcome for President Obama. After an introduction by the new Speaker of the House, John Boehner,  the President  began boosting the people’s morale by addressing current issues with China. Recently, China has been outsourcing the American economy through its high-innovation techniques, research, and education. As a result, many people believe that China is on the rise in becoming the newest super-power; however, America is currently superseding the Asian nation.  Although America tops China in Newsweek’s “World’s Best Countries” as number 11 compared to 59th respectively, the President  hopes to put America back to first-place status by “Out-innovating, out-educating, and out-building the rest of the world.” Further, President Obama said,   “The world is changing. It should not discourage us, it should challenge us.”

First on Obama’s rhetoric to “win the future” is to challenge the educational system. President Obama’s main focus is to better the public school system, which is currently suffering from lack of well-educated teachers and mismanaged funding. Currently, America is in ninth with the most people with college degrees in the world.

In order to give government funding to deserving public school systems, President Obama introduced “The Race to the Top Challenge.” The campaign challenges all 50 states to improve their teaching quality by discovering a successful way to reform their education policy; if they do so, the federal government will pay them to reconstruct their education system. Not only does Obama urge states to advocate  educational changes, but he also advises parents to support their children in furthering their education by putting a time limit on TV and Internet use, as well as educate their children to aspire towards becoming successful and influential individuals, not ridiculous celebrities.

Also, President Obama sees hope in the “anchor babies,” children born from illegal immigrants in the United States, and immigrant children for furthering our future. “We must stop expelling talented, responsible young people, who could be further enriching this nation.” For those illegal children who maintain a certain GPA, are free from legal issues, and maintain a good stance within the community, President Obama plans to tackle immigration reform to properly help successful individuals who are benefits to our country.

Second on his agenda, President Obama focused on how the American people can further themselves through technology. Referring to huge American technological companies like Facebook and Google, Obama stressed the impact America has created in developing such programs to connect everyone in the world simply with the touch of a button. He reminded his audience that just as America was once the country of new ideas and inventions,  now other countries are threatening America’s innovation through new techniques. In response to such realities, Obama reminded the American people that the current situation is this generation’s  “Sputnik moment.”

“We do big things.  Fom the earliest days of our founding, America has been the story of ordinary people who dare to dream; that’s how we build the future.”

Together as one, the President said the American people must focus on energy technology for the future, as well as create new and improved products. President Obama plans to improve America’s lagging infrastructure by implementing more high-speed railway systems and reorganizing the roadways. In regards to clean energy, Obama hopes to have one million electric cars on the roadways by 2015. His greatest goal, which gained him no applause from the Republicans, is to ask Congress to eliminate the billions in taxpayer dollars given to oil companies and put the money to good use by investing in cleaner energy.

The greatest task on Obama’s fiscal policy is tackling the deficit issue. President Obama proposed to freeze annual domestic spending for the next five years, a freeze that  will coincidentally reduce the deficit by $400 billion in the next decade. In order to save the national deficit, it will require painful cuts. “If we really care about our deficit, we simply can’t afford a permanent extension of the tax cuts for the wealthiest 2% of Americans.”

Finally, President Obama reminded members of Congress that in order to advocate the wishes of the American people, they must step beyond their respective party lines in order to fully impact a change in America.

“We have fought fiercely for our beliefs and that’s a good thing.  That’s what a robust democracy demands.  It is what sets us apart as a nation. We will move forward together, or not at all.”

Although Obama’s willingness to work with both parties gave him a 91% approval rating in CBS’s State of the Union Poll, members of Congress must now come together to enact rightful change in government. After years of inconspicuous battles between the Republican and Democrats in Congress, the freshman Congress holds the power to end the political banter and strive for bipartisan legislation.

President Obama even reprimanded Congress that the American people evoked their concerns during the mid-term elections and hoped for their new representatives to fully work with all members. By working together, the American people can regain their faith in the government. Echoing the late Robert F. Kennedy, Obama stated, “The future is not a gift, it is an achievement.” The future is an achievement we must all work together to follow, withstand, and prosper during the upcoming year.