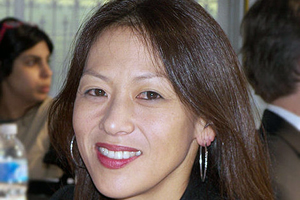 PASADENA, Calif. — Angela Lo grew up in a strict household, under constant pressure to get grades good enough for admission to a top university. In stark contrast to stereotypes of Asian student success perpetuated in Amy Chua’s new bestseller “Battle Hymn of the Tiger Mother,” Lo put off going to college and instead got a job.

“I felt that by me not succeeding, I kind of let my parents down,” said Lo, who at 30 still lives with her Chinese-American parents and works as a dishwasher. “As a kid, I felt like garbage.”

She said she recently enrolled at Pasadena City College to get her parents off her back.

Like Lo, about half the nation’s Asian-American students enroll in community college, where they often struggle to pay for classes and scramble to find room in remedial courses. They get far less attention than overachievers like Chua’s highly micromanaged daughters, whose rigid childhood is described in a book that’s sparking debates about Asian-American student success.

An online excerpt from Chua’s book in The Wall Street Journal last month garnered more than 7,500 comments — the most of any article in the site’s history — and prompted impassioned responses, many of them taking issue with Chua’s approach to parenting. “Parents like Amy Chua are the reason why Asian-Americans like me are in therapy,” one self-confessed D-student wrote.

With 48 distinct groups living in the U.S. that speak more than 300 different languages, many Asian-Americans don’t neatly fit the “model minority” stereotype of high-achieving, straight-A students, as the responses to Chua’s excerpt illustrated.

“There’s such despair, alienation and unhappiness in students who have failed to live up to those expectations,” said Hugo Schwyzer, a history and gender studies professor at Pasadena City College, a public, open-admissions, two-year school where about a third of the student body is Asian. “I have gay and lesbian Chinese students. I have overweight Chinese girls. I have Chinese students of barely average intelligence who work hard and get Cs.”

Preconceived notions about race and academic achievement mask the many challenges facing Asian-American students, where there’s a glaring disparity between students who excel versus those who don’t even graduate from high school.

For example, it’s true that Asian-Americans are disproportionately represented at elite U.S. universities. Even though they account for just 5 percent of the nation’s population, they encompass about 20 percent of enrollments at Ivy League institutions such as Harvard, where more than 30,000 students vied for 1,664 spots in last year’s freshman class. Asian-Americans made up 22 percent of admitted students last year.

But it’s also true that the academic performance of Asians isn’t uniformly high.

This reality is in plain view in California, which boasts the nation’s largest Asian-American population — an estimated 5 million people, or about 13 percent of California’s inhabitants. Here, Asians scooped up twice as many bachelor’s degrees from the University of California system as their white counterparts in 2008, according to a 2010 report, “The State of Asian American, Native Hawaiian and Pacific Islander Education in California.”

Yet 40 percent to 45 percent of those belonging to less well-known Asian ethnic groups — such as Hmong, Cambodians and Laotians — don’t even have high school diplomas, the report found.

“There are a lot of misconceptions about who Asian-American students are, and this is true in institutions that have large concentrations of Asians and ones where there are very few Asians,” said Robert Teranishi, associate professor of higher education at New York University. “It results in being omitted from a lot of broader discourse about the needs of these students. They remain invisible in a lot of ways.”

Little data exist about Asian-American students as a whole, added Teranishi, who found that just 13 out of 3,000 articles that ran in top higher education journals from 1996 to 2006 addressed the needs of this diverse group.

Asian-Americans’ reputation for academic success is a double-edged sword when it comes to college admissions, according to Princeton University sociologist Thomas Espenshade, who’s found that they need stronger SAT scores and grades than other students to land coveted spots at elite colleges.

The more pressing issue for a third of the Asians living in California is their struggle to learn English, according to the 2010 report on the state of Asian-American education, which was prepared for California State Assembly Member Mike Eng. The same report found that some groups — among them, Hmong and Cambodians — have poverty rates double the state average.

“We find that Asian-American students, as they end up in college now — compared to previous years — are more likely to need special tutoring, or remedial work in English — one in five reported this,” added Chang, a co-author of the report.

Schwyzer says the less successful students at Pasadena City College seek solace in video games, with some of his male students spending half of their waking hours glued to computer screens. Others harm themselves or attempt suicide. Many need treatment for depression but may not seek it because of cultural norms.

“Chua’s assumption — that the pressure cooker of perfectionism will cause short-term pain but long-term success — simply isn’t borne out by the evidence,” Schwyzer wrote in a recent blog post.

Asian-American girls age 15-24 have the highest suicide rates in that age group, according to the Department of Health and Human Services. But there’s been little to no research looking at whether “Tiger Mom” parenting pressures are partly to blame.

Students like Mon-Shane Chou, a 19-year-old student at Pasadena City College, are among those who say that being raised in a strict, high-pressure household is psychologically damaging.

“When I was small, if we misbehaved, there was this bamboo back-scratcher that my mom or dad would hit us with, and we would not be allowed to cry,” said Chou, who hid her report cards from her parents. “Not being allowed to cry is actually somewhat common in Chinese families.”

Chou now hopes to transfer to a school in the University of California system and earn her bachelor’s degree in sociology, but she didn’t fit in with the driven Asians in her high school.

“My peers all wanted to be in AP classes and to have 4.0s,” Chou recalled. “I wasn’t quite sure why they wanted it. It seemed like they had these goals in academics that didn’t make sense to me because they caused so much stress.”

(This story was produced by The Hechinger Report, a nonprofit, nonpartisan education-news outlet affiliated with The Hechinger Institute on Education and the Media, based at Teachers College, Columbia University.)