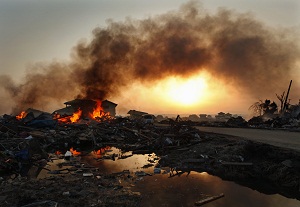 SENDAI, Japan — A fresh explosion rocked a crippled nuclear complex as rescuers from around the world converged on Japan’s devastated earthquake zone, searching for survivors and ministering to the sick and hungry. With the death toll from the largest quake in Japan’s recorded history expected to ultimately reach the tens of thousands, more than a half-million people have been displaced by growing radiation fears and the massive swath of destruction.

Japanese officials ordered people near the Fukushima complex — around which an evacuation zone had already been carved out — to stay indoors after a hydrogen blast Monday in the containment building of one of its six reactors, similar to one that occurred Saturday in a separate reactor.

Cabinet secretary Yukio Edano, speaking in a live TV broadcast, said it was believed that the reactor remained intact and “we think that the possibility of a massive radiation emission is low.”

But the apparently intensifying nuclear crisis sent a wave of fear and anxiety through the quake-battered country, as powerful aftershocks from Friday’s temblor continued to rattle cities and towns. Earlier, the government reported that radiation levels had again risen above legal limits outside the Fukushima complex, about 150 miles north of Tokyo, where authorities have been pumping seawater into two overheated reactors to try to cool them down.

The use of seawater was considered a drastic emergency measure — a “Hail Mary” improvisation, by the characterization of some experts — and it emerged that early Monday, even that had briefly failed. Japan’s nuclear safety agency said that at about 1 a.m. the seawater injection was halted for about 2 1/2 hours because the tanks being used went dry, and that stoppage triggered rising pressure in the reactor container prior to the explosion.

A Tokyo Electric Power Co. official said six people were missing after the blast at the Fukushima nuclear plant. Several other nuclear installations were under close watch for potential problems.

The International Atomic Energy Agency said its lowest classification of emergency had been declared at a separate plant outside the northern town of Sendai. But Japan’s nuclear safety agency said that although there had been a rise in radiation the reactor’s cooling system was functioning adequately.

Across a wide swath of earthquake-hit territory, hundreds of thousands of shivering survivors roused themselves from a third cold night spent huddled in darkened emergency centers, cut off from rescuers, aid and electricity. At least 1.4 million households had gone without water since the quake struck and some 1.9 million households were without power. Rolling blackouts to conserve energy were scheduled across much of the country.

In Tokyo and other large cities outside the quake zone, the first full workday since Friday’s temblor began with delays and disruptions. Many of the train lines that normally run between Tokyo and outlying suburbs and surrounding cities were either running far less frequently than normal or not running at all. Subway and train lines crisscrossing the capital were also curtailed.

With fears about how the world’s third-largest economy would weather the ongoing fallout from the massive quake, Japan’s main stock index, the Nikkei, plunged by 6 percent in early trading. The central bank said it would inject a record $182 billion into money markets to try to stabilize the financial system.

A full reckoning of deaths and damage could take weeks, but the picture grew grimmer with each passing hour. Japan’s Kyodo News agency reported the discovery of an additional 2,000 bodies at two separate locations in Miyagi prefecture. The official death toll — expected to be dwarfed by a final full count — stood at 1,598. The official rolls listed 1,720 people missing, but many thousands more are unaccounted for.

In Miyagi, with a population of 2.3 million, at least 10,000 residents were killed, police spokesman Go Sugawara told The Associated Press late Sunday.

An international rescue effort gathered force, with teams arriving from China, New Zealand, Germany and the United States, among other nations. Eighty-eight governments and six international institutions have offered assistance with recovery efforts, the Japanese Foreign Ministry announced. Even Bangladesh offered to help — an unaccustomed reversal for Japan, one of the world’s biggest donors of foreign aid.

With 100,000 Japanese troops taking part in the rescue effort, the Defense Ministry said it was considering the formation of a volunteer rescue brigade, consisting of thousands of additional helpers who could be dispatched within days.

There were some dramatic rescues of tsunami survivors Sunday, including that of a 60-year-old man who had been waiting for help since he was swept out to sea Friday. Hiromitsu Shinkawa was spotted by rescuers at 12:40 p.m., nine miles off shore by the crew of a Japanese Maritime Self-Defense Force destroyer, according to Jiji Press.

Shinkawa, from the devastated city of Minamisoma, was conscious and in “good condition” after the rescue, Japanese officials said.

“I ran away after learning that the tsunami was coming,” Shinkawa told rescuers, according to Jiji Press. “But I turned back to pick up something at home, when I was washed away. I was rescued while I was hanging (on) to the roof from my house.”

Japan’s Yomiuri newspaper on Monday reported the discovery of an elderly quake survivor, a man in his 70s, in a collapsed building — a rare development amid the constant discovery of more bodies.

Compounding a general sense of chaos, aftershocks continued to rumble through much of the country. Many people are bracing for the worst in the wake of the prediction by Japan’s Meteorological Agency that there was a 70 percent probability of a magnitude 7 quake in the next three days.

After a magnitude 6.2 tremor on Monday morning, centered near Tokyo, there were reports of a new tsunami, but they proved false.

Officials from Tokyo Electric Power Co. began rationing power Monday to the 45 million people they serve to prevent Tokyo and nearby prefectures from experiencing massive blackouts, Kyodo reported. Government officials said that the region-specific outages would affect a broad range of things used in everyday life such as traffic signals, medical institutions and train operations, and possibly result in water supply disruptions.

The power rationing is expected to last until the end of April, officials said.

Japanese Prime Minister Naoto Kan told reporters Sunday that his country was facing its most difficult challenge since World War II and called on his people to unite in the face of a devastating earthquake and tsunami and potential nuclear crisis.

“This is the toughest crisis in Japan’s 65 years of postwar history,” Kan said during a televised news conference. “I’m convinced that we can overcome the crisis.”

In the quake zone, makeshift cities of survivors sprang up. At a high school in Sendai’s Natori City, now a makeshift emergency evacuation center, 110 people including 30 children bedded down for the night on the floor of the school gymnasium, sleeping on wrestling mats and blankets. Children sat quietly or passed their time with stuffed toys, sketchbooks and wood shogi set, or Japanese chess.

Tomohide Takahashi, an English teacher helping staff the center, said the school still can’t account for five students of its 450.

“We’re short on food and water,” Takahashi said. “We need a generator. Some people stay for a while then go home, new ones come. A few people get sick, but we haven’t had many injured. In general, people are afraid.”

At a makeshift disaster center, long lines stretched from a bank of eight phones. There was no cell coverage, so many held their mobile phones as they spoke on the landlines, looking up stored numbers. In the lobby of the building, one of the few with electricity in the prefecture because it’s got a generator, dozens of cell phones snaked from chargers off the few available outlets, a sign of people’s hopes service would be resumed.

Just beside the entrance, a crowd of residents gathered around a flat-screen TV watching the news, which included repeated video footage of the tsunami they so recently lived through.

The area withstood the earthquake relatively well with most of the devastation resulting from the tsunami, which residents say struck about 30 minutes later. So while the neighborhoods close to the water were flattened, a few blocks inland there are all the trappings of normality, from car dealerships and strip malls to convenience stores and pachinko parlors, although business remains closed because of the lack of power and water.