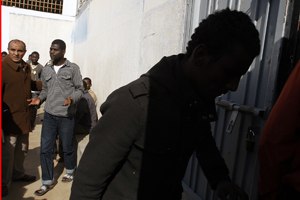 The contacts, conducted through the council’s civilian representatives in France and elsewhere in Europe, are made by secure satellite telephone connections, according to spokesmen for the rebel leadership in Benghazi.

“There is communication between the Provisional National Council and U.N. assembled forces, and we work on letting them know what areas need to be bombarded,” spokesman Ahmed Khalifa said in an interview Wednesday.

The contacts, which began over the weekend, are evidence of cooperation between the Libyan opposition and the international military alliance that is waging air and missile strikes on Moammar Gadhafi’s command and control centers as well as other military targets.

They also highlight the diplomatic delicacy of the mission and the awkwardness of a military operation designed by multiple governments with sometimes conflicting goals. The Obama administration and the Pentagon say the resolution does not authorize airstrikes specifically for rebel forces.

The White House declined to comment on whether allied commanders had established regular contact with the rebels to help identify military targets. A Pentagon spokesman, Marine Col. Dave Lapan, said there is “no formal or informal contact” between the rebels and American forces.

But Navy Rear Adm. Gerard Hueber, chief of staff of Joint Task Force Odyssey Dawn, said that though there was no official collaboration, information was being passed from the coalition to the rebels. “We have told … the opposition forces how to maneuver, and we have also told Moammar Gadhafi’s forces what they were expected to do in accordance with the U.N. Security Council resolution,” he told reporters.

In addition, current and former American officials say that CIA operatives and equipment were sent into rebel-held areas to monitor their activity even before the air bombardment began. It’s not clear whether those operatives are still in Libya, and if so, what is their current role.

Many, if not most, of the coalition governments want to help the rebels grind down Gadhafi’s forces. But since the United Nations authorized only a limited mission intended to prevent Gadhafi from killing civilians, officials are unable to acknowledge that they intend to help the rebels.

Jeffrey White, a longtime Defense Intelligence Agency official, said U.S. officials “are trying to maintain this fig leaf cover that we’re not assisting their combat forces against the Libyans. But we’re clearly creating conditions in which they can operate better.”

“This is a very fine line,” said White, now with the Washington Institute for Near East Policy. “If they’re passing information for targeting purposes, that’s not necessarily formal coordination, but certainly cooperation for the same end.” He added that gathering information was “clearly the right thing to do.”

Leaders of the political opposition also have been using satellite phones “and other secure means” to help identify civilian areas under assault by Gadhafi forces, said Mustafa Gheriani, another rebel council spokesman.

“We tell them of urgent situations in areas where we need help to protect civilians being attacked by the regime’s forces,” Gheriani said. “The lines of communication are open.”

Gheriani said there was no direct military-to-military contact. He said rebel military officials pass on information to the council’s political representatives in France, which has recognized the council as the legitimate representative of the Libyan people, and to council officials elsewhere in Europe.

“We have clearly established contacts, both political and military, but it all goes through our political leadership,” Gheriani said.

Two council spokesmen said there was no coordination with alliance military representatives on rebel movements on the ground, and no attempts by alliance officials to rein in the undisciplined and essentially leaderless rebel fighters.

Gheriani said the council was still trying to bring its fighters under a unified central command. “It’s not an easy task to manage revolutionaries, and we’re still trying to organize them,” he said. “These are volunteers willing to die for their cause, and they can be difficult to control.”

Council spokesmen have said the rebels are receiving light weapons, ammunition, supplies and communications equipment from other nations but have declined to name the donors.

U.S. officials have acknowledged that they have been weighing whether to provide weapons, ammunition and other equipment to the rebels, a move they say could quickly make a difference in the war. A European official said whether the coalition begins funneling arms to the rebels “really depends on how far Gadhafi goes in his attacks.”

Reports from the region suggest that the Saudis and Egyptians have been providing arms. Although U.S. officials could not confirm that, they say it is plausible.

Times staff writer Zucchino reported from Benghazi and Richter of the Tribune Washington bureau from Washington.

Ken Dilanian in the Tribune Washington bureau contributed to this report.