A flexible way to use sun’s rays 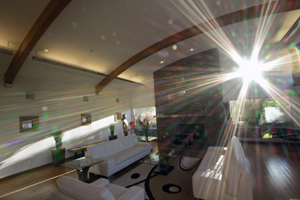 LOS ANGELES — Carl Harberger’s 6,000-square-foot house in the Chatsworth neighborhood of Los Angeles is equipped with six refrigerators, five TVs, a smattering of computers and a pool, among other things — enough to draw the wagging finger of the eco-minded if it were not for what Harberger has on his roof.

By the end of the month, the Los Angeles Department of Water&Power is expected to flip the switch on the home’s 24-kilowatt installation of thin-film solar panels, bringing to life what is believed to be the largest residential installation of its kind in the country.

The thin-film panels generate about 50 percent less electricity per square foot and cost about 10 percent more than traditional photovoltaic panels, but the flexible film can handle curved surfaces and integrate less obtrusively into a home’s silhouette. It’s also lighter weight — an advantage in earthquake country — and unlike bulky bracketed panels, thin-film doesn’t need to be drilled into the roof, reducing the risk of leaks.

Harberger’s installation will power not only his lighting, electronics and air conditioning, but also systems that would traditionally be juiced with natural gas. The thin film will heat all the water for the home and run the forced-air heating system as well as the clothes dryer and oven.

“There are so many advantages to going all electric with very little natural gas,” Harberger said.

Outside, natural gas powers a barbecue grill and an auxiliary heater for a shallow pool that is otherwise warmed by the sun or an electric heater. Inside, natural gas is used only for the kitchen cook top and a living room fireplace.

Harberger, 49, designed the house, which sits on a quiet street frequented by trotting horses. He has been living in it for two years with his wife, two children and three dogs while planning the solar installation, which cost $160,000 before a DWP rebate of about $50,000. A federal tax credit will be about $30,000. The panels are made by Uni-Solar, based in Auburn Hills, Mich., and were installed by ADR Solar Solutions, a Woodland Hills, Calif., firm that specializes in thin-film solar.

Like most homeowners who go solar, Harberger considered the bulkier panels that are commonplace across the country. But the metal-sheet construction and curvature of his roof led him to Uni-Solar thin film.

Mounted on the southern- and western-facing sections of the roof, the thin film can better handle seasonal differences in the sun’s patterns and maximize electricity generation. The uppermost portion of the panels will perform better in the summer; the lowermost panels will do better in the winter.

“Right now, our electricity use is balanced,” Harberger said, adding that his family will use as much electricity as it generates, on one condition. “If I can control my kids,” he said. “I tell them to watch the smallest TV possible.”