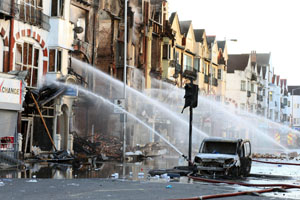 After two nights of violence, police said they arrested a total of 160 people in connection with the riots, which started in the northern borough of Tottenham Saturday but quickly spread to other parts of the city the following day.

On Monday evening, fresh clashes erupted between rioters and the police in the suburb of Hackney, in east London. Rioters were seen attacking police with large sticks, setting cars alight, smashing shop windows and looting goods.

The BBC said the trouble was sparked by a stop and search incident in Hackney.

Over the weekend, the mainly youthful rioters set alight buildings, buses and police cars, attacked officers with sticks, bricks and missiles and proceeded to ransack shops in a looting spree marked by a “shocking level of violence,” police said.

One of the buildings destroyed in a fire was expected to be demolished later Monday. In addition to many businesses, the Post Office and the Job Centre on Tottenham High Road have been wrecked.

Meanwhile, community leaders called for calm. “Young people need to understand they are ruining our communities. We can’t give up. We can’t allow London to burn,” said the Rev. Nims Obunge, a pastor at the Freedom’s Ark Church in Tottenham.

At least nine officers were injured in the clashes on Sunday, following eight who needed hospital treatment after Saturday’s riots.

“We need to start talking together to identify everything that happened so that we can rebuild, not just physically, but socially,” he said.

Prime Minister David Cameron, who is on holiday in Italy, condemned the violence as “utterly unacceptable.”

Meanwhile, Theresa May, the home secretary, cut short her holidays to return to London for urgent talks with police chiefs and community leaders.

“Those responsible for the violence and looting will be made to face the consequences of their actions,” she said in a statement.

Police said emergency services were deployed to respond to “copycat criminal activity” in many parts of the capital after a night of violence and looting in Tottenham.

Officers responding to “sporadic disorder in a number of boroughs” had made more than 100 arrests and charged 16 people with offences in relation to the disorder.

The disturbances, the worst in London since the 1981 riots in Brixton, south London, were apparently sparked by the death of a 29-year-old man in Tottenham, in a police sting operation last week.

As the death of Mark Duggan, an alleged drug criminal, was being investigated by the Independent Police Complaints Commission, media reports said doubts had arisen over the initial police claim that he died in an exchange of fire.

In a statement, Duggan’s family described as “utter rubbish” the allegation that he had shot at the police, but also made clear that it did not “condone” the riots and looting that followed.

In the early hours of Monday, the riots also spread to Brixton, where a number of shops were set ablaze, and there was sporadic violence at Oxford Circus, in central London.