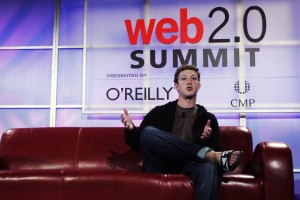 SAN FRANCISCO — The Internet shouldn’t just be a place to gather information and connect with friends, Facebook CEO Mark Zuckerberg believes. It should also be the place where you preserve and share the most important memories of your life.

Zuckerberg on Thursday unveiled a new centerpiece of the social network called “Timeline,” along with ways to allow friends to discover and share music, read and comment on the news, or watch the same TV show or movie their friends are enjoying.

“We wanted to make Timeline a place you were proud to call your home. Timeline is a completely new aesthetic for Facebook,” said Zuckerberg, showing off the visual new feature at the company’s f8 conference, before an audience of 1,700 software developers and business partners.

Timeline allows Facebook members to store and share videos and photos from the most important moments of their lives, organized year by year. It will include a map showing where on the planet you spent your time over the past year. The new feature will gradually become available on Facebook in coming weeks.

Social media until now has been about the present or the recent past.

“It’s the story of your life,” Zuckerberg said. “You have all your stories, all your apps, and a new way to express who you are.”

While Timeline was a surprise announcement and the product of a secret one-year project within Facebook, the new suite of content apps, including new partnerships with digital music service Spotify, movie company Netflix and Internet TV company Hulu were expected.

The new apps, which will start to be available Thursday, will allow people to share their experiences — whether listening to a Green Day song or taking a run in Golden Gate Park — as they happen. So when people engage in an activity, Facebook’s newly installed ticker running down the right side of the screen will announce things like, “Bill is listening to Green Day,” or “Sarah is running in Golden Gate Park.”

“We call it real-time serendipity,” Zuckerberg said. The apps will work on a desktop browser as well as on a mobile device.

Spotify CEO Daniel Ek, who took the stage with Zuckerberg to show off Spotify’s social music app for Facebook, said people are twice as likely to purchase new music on Spotify when they engage through Facebook to regularly share their favorite music.

“We are bringing people back to paying for music again,” Ek said, which will support artists in creating more great music.

“It’s amazing how much music you can discover from your friends,” Zuckerberg said. “Knowing that you helped a friend discover something new, and that they like your taste in music, is awesome.”