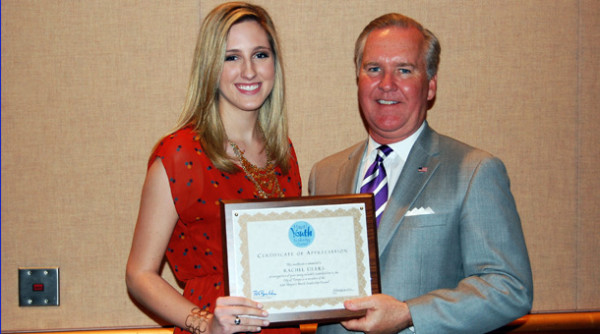 Eight Academy students celebrated Valentine’s Day as honorees at the Tampa Mayor’s Youth Corps Luncheon at the Tampa Convention Centered and presided over by Mayor Bob Buckhorn. The Tampa Mayor’s Youth Corps is a highly selective organization that chooses 40 teens from each of the 33 high schools in the Tampa Bay area to represent the teens of Tampa Bay under the leadership of the Mayor.

After completing a yearlong membership with this group, each member is eligible to be selected to continue his or her as a member of the Leadership Council. Academy girls Jacqueline Posada, Kerrie Spiller, and Rachel Eilers were honored as current members of the Leadership Council and Catherine Young, Jacqueline Moreda, Victoria Foody, Victoria Litschgi, Natalie Navarro, and Meagan Gonzalez were honored as members of the Mayors Youth Corp Class of 2011.

After a long year of community service activities and open forums with Mayor Buckhorn, the Youth Corp and Leadership Council were honored with a delicious luncheon that did not only include MYC but also special guests such as City Attorney Jim Shimberg and other City of Tampa workers.

Youth Corps Coordinator Ms. Rebecca Heimstead organized the luncheon, which consisted of an overview of the year by members of the Mayors Youth Corp and two members of the Leadership Council. As one of the Leadership Council representatives, Kerrie Spiller explained the work of her group throughout the year and ran the PowerPoint presentation that feature pictures and explanations of the Council’s many accomplishments.

After another informative PowerPoint given by both the Leadership Council and the Youth Corp, the group honored individual members with plaques in recognition of their service, presented to them by the Mayor, and an honorary photo with Mayor Buckhorn himself. The luncheon ended with a speech by Mayor Buckhorn, congratulating the graduating members and especially the seniors. Mayor Buckhorn emphasized his hope for the seniors’ success but to “go out and get the best education possible, be that in Florida or another state. However once you have done that, come back home to Tampa. I need you back here in Tampa.”

With these closing words, Ms. Heimstead congratulated both classes for their dedication and service and her well wishes for the success of her members.  She added that she hopes the senior volunteers will stay in touch and fill her in on their many adventures as they break out into the world.