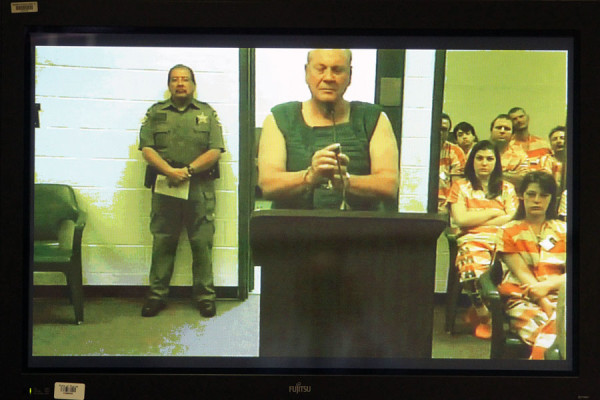 Curtis Reeves, Jr. stands before a judge ready to receive his sentence.

On Monday, January 13, a man was shot and killed at the Cobb Theatre  in Wesley Chapel. The victim was Chad Oulson, an innocent father spending the day with his wife at the movies; and the shooter, Curtis Reeves, Jr., a retired Tampa police officer.

Oulson was text messaging his young daughter’s babysitter before the movie started. Reeves asked Oulson to put his phone away, but he did not comply. The two men argued and after a few moments, Reeves became so irritated that he left the theater to complain to a manager. However, he simply told Reeves to ignore the man’s texting. As a result of the manager’s basic ignoring of Reeves’ complaint, he returned to the theater even more irritated than before. Upon Reeves’ return, Oulson asked the retired officer if he had gone to a manager to complain about him, and that he was only text messaging to check on his young daughter. Things apparently got even more rowdy at this point, and some popcorn was thrown. Suddenly, Reeves pulled out a gun and fatally shot the innocent father. Oulson’s wife attempted to block the bullet with her hand, and as a result was wounded. Thankfully, among the moviegoers in the theater were two nurses and an off-duty deputy sheriff. The nurses rushed to Oulson to try to help him and the deputy made sure Reeves would not shoot again. After multiple attempts to revive him, Oulson died later that day. Reeves was taken into custody almost immediately upon the shooting.

A police officer’s code of conduct is to serve and protect, so how ironic it is that a former long term, experienced cop committed such a terrible offense, more than aware enough of the repercussions to follow?

Academy’s very own Officer Jack Hair happens to be a close, personal friend of Reeves’. The two met when Officer Hair started at the Tampa P.D. many years ago; Reeves was a lieutenant at the time.

Hair remarked, “I liked him, I really liked him. He was a good guy. We’ve had breakfast and [ironically] have gone to the movies together many times when we were both retired. He’s a really nice, level headed guy, always has been.”

Many have questioned if some sort of PTSD issue sparked Reeves to act out so rashly. Which after almost an entire lifetime of an intense, stressful job, would at least make some sense of the situation. Also, interestingly enough, Reeves began the Tampa P.D.’s TRT, the Tactical Response Team, which is basically their SWAT team. Ironically, this program provides psychological therapy for the brave officers.

We may never know or understand the true reason of Reeves’ actions, but regardless, an innocent man is dead. The situation is extremely sad and we should keep Oulson’s and Reeves’ families in our prayers during this difficult, confusing time.