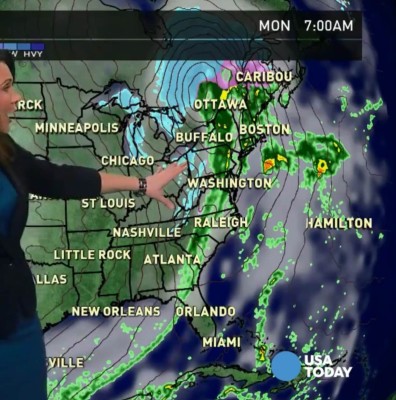 The cold front is marked by the line of showers it carries down the east coast leaving a biting chill in its wake.

As the holidays end, many tend to forget that the season of winter continues. After a warm 25th and even warmer New Year’s, the residents of Tampa predicted a heated introduction into spring. However, the nationwide climate had other ideas. The temperatures in the Tampa Bay area first began dropping Friday, January 3. A cold front swept across the U.S., leaving more than just a light blanket of fresh snow in its path.

Many forecasts across Florida predicted the incoming chill; however most were not prepared for its strength. The worst temperatures Tampa experienced were in the mid to low 30s on January 7. Accompanied by a Northwestern wind, the Bay residents were hardly dressed to battle the cold. The day was spent crowding near heaters with warm cups of cocoa.

Yet, as Claire Wiseman’s article for the Tampa Bay Times predicted, the cold was not to last. The cold front may have been harsh, but it was brief. Temperatures were already climbing by at least 10 degrees a day starting January 8.

Most Northern states are not so lucky. The cold front experienced in Florida was only a small peek at the conditions found throughout all of winter north of the “Sunshine State.” Only the far southeast and southwest corners of the nation are safe from the heavy snowfall and chilling temperatures. Detroit Free Press was one of the many news reporters sharing updates and forecasts concerning the sudden powerful cold front that brought not only fresh snow but fresh dangers as well.

Weather forecasts can be viewed by month at sites such as Weather.com to help residents in both Tampa, Florida and Detroit, Michigan become better prepared in the winter. Although things seem to be warming up here at AHN, you never know what wacky weather to expect next.