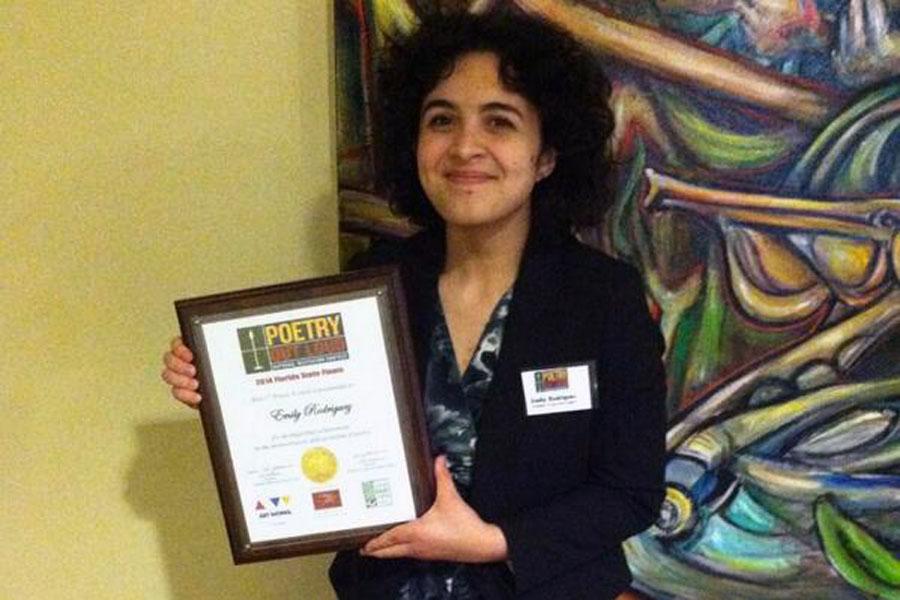 On Saturday, March 1, Senior Emily Rodriguez became the Poetry Out Loud champion for the state of Florida. She competed against over forty other high school students, and came out victorious.

The competition takes place at the Heritage Hall Auditorium in Tallahassee, Florida and requires the recitation of the same two poems the competitor originally recited in their school competition, which for Rodriguez were “The Empty Dance Shoes” by Cornelius Eady and “Memory As a Hearing Aid” by Tony Hoagland. The state competition asks for the recitation of a third additional poem, so Rodriguez added the poem “The Holy Sonnet: Death, be not proud,” by John Donne.

Overall, Emily noted how the other competitors were extremely nice, and she enjoyed her time with them. The night before the competition, the competitors were invited to a meet and greet at a nearby historical Tallahassee building. The students were served dinner and given the opportunity to recite any original poetry they had prepared. Rodriguez remarked that it was a good bonding experience and it broke the ice and any tension between the competitors.

A state championship competition would make most people nervous beyond belief, but not Rodriguez. She said competing in this round almost felt, “less nerve-racking than the first round,” because she didn’t know her competition. Therefore, she was able to put any fear of judgment by her peers aside and focus on her performance. Also, the venue was much smaller than Academy’s own Brady Center, held in a small library museum, which helped calm her nerves.

The day of the competition called for a great deal of patience from Rodriguez, as a result of being the first competitor of each round to perform. She said it was a good thing, though, because she got to relax and get to know her fellow competitors while she waited throughout the day. The boredom became so overwhelming at one point that the students played poetry games with one another for hours. They even resulted to an intense game of water bottle bowling and the construction of complex structures (with water bottles). Overall, the day was a great bonding experience for all lovers of poetry and recitation.

Rodriguez comments regarding her recitation practice methods, there is such a thing as reciting a poem too much. She compared it to the feeling of saying a certain word over and over until it doesn’t make an ounce of sense anymore. She knew the poems, and she proved it when she was named the state of Florida champion.

“I’m really, really excited to go on to the national competition. It’s actually not going to be much larger than the state competition, so I’m not too nervous. It’s an incredible opportunity,” says Rodriguez.

Emily Rodriguez will advance to the national Poetry Out Loud competition at the end of April, which will be held in Washington, D.C. She will recite the same three poems she performed at the state competition, and if named the national champion, will receive the incredible honor of performing for the President at the White House.

Good luck to you Emily, we’re all rooting for you!