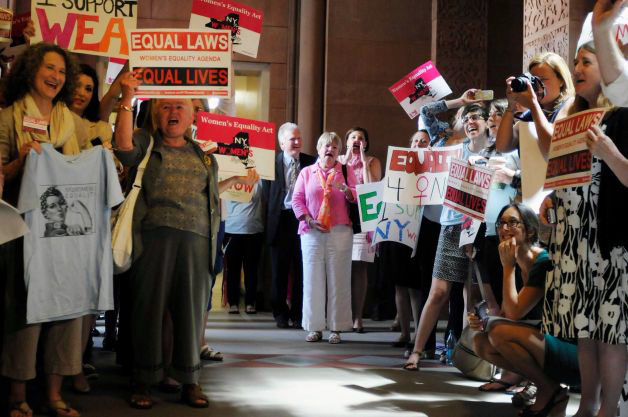 Despite ample protests and disagreement toward unequal wages among men and women, Republican senators still voted agaist resolving the issue.

One would think that in the year 2014 with an African-American leading the free world, a Hispanic leading the Catholic Church, and three different women holding the positions of Speaker of the House and Secretary of State within the past ten years, that something as simple as wage equality among genders would certainly be common sense, right? Wrong.

Last week, the Democratic senate members attempted for the third time in recent years to get legislation passed for equal pay among genders. However, every single Republican senate member voted against it being passed, including the women.

Why, as a woman living and working in a world where her rights were worked so extremely hard for and earned so valiantly, would you vote against something as simple as equal compensation among genders? It simply does not make sense.

Today, women graduate from college and graduate schools at higher rates than men and make up about half of the U.S.’s workforce. Also, last year, it was found that almost half of all women are either the only or the primary breadwinners for their families in today’s American households. So, why should they be paid less than their male spouses and coworkers? They shouldn’t.

A woman making less than a man in the same occupation is not only wrong and unjust, it is a violation of her rights as an American. Our Founding Fathers clearly and boldly stated in The Declaration of Independence, “all men are created equal.” However, this injustice certainly isn’t equal.

Unfortunately, a serious issue that needs to be resolved has once again been subjected to and pushed aside by the constant battle between the republicans and the democrats. So much hatred exists between the two parties that too often, problems do not get solved because of the immense amount of time and effort it takes to reach a compromise; and many a time, the compromise just isn’t enough.

In a statement after the vote, House Minority Leader Nancy Pelosi remarked, “The promise of equal pay for equal work should not be a partisan issue- it should be a matter of common sense and fairness, an essential step for the security of our families, the growth of our economy, and the strength of our middle class.”

Also last week, after the vote against wage equality and after only two short months of getting legislation passed to raise the minimum wage, President Obama once again fought for the rights of American workers. In an effort to fight back against the senate Republicans for equal pay among genders, President Obama declared April 8th to be National Equal Pay Day. On this day, the president signed an executive order to eliminate discrimination in the workforce and motivate workers to take a stand by negotiating their pay.

The President is also having Secretary of Labor Tom Perez require federal contractors to submit proof that employers are actually complying with his order, via data on employee compensation by race and gender. The hope is that absolute fair and equal pay among American workers is ensured.

In his most recent State of the Union address, President Obama remarked, “When women succeed, America succeeds.” Our recovering and growing economy cannot afford to have anybody working for its betterment and strengthening held back or prevented from giving their all and working their hardest.

One member of Academy’s prestigious English department, Dr. Lauren Oetinger, was quite upset over the senate Republicans’ vote. She stated, “It’s sad to me that [wage equality among genders] would become a party line issue, instead of an issue of human equality. It’s 2014, it’s time for women to be getting paid as much as men. We are certainly not at the end of an economic battle, but it’s disturbing that women get paid less than men in this day and age and it’s disappointing to me that we’re still fighting this fight. What I think is most troubling is that this issue has seemed to affect an entire party and fundamentally, it’s distressing.”

Interestingly enough, she also remarked, “It would not surprise me if Pope Francis were to tackle this issue, because he seems to be taking a stand on all of the hot button issues that other popes have been afraid to face. I feel as if there is a global climate of change in the air, so I don’t think we’ve seen the last of the issue of equal pay for women. However, it is still incredibly disheartening that not only was it voted against, but it was a unanimous decision among every, single Republican, including the women.”

All we as Academy woman can do is hope and pray that we will see a change in wage equality among genders in our lifetime. Also, most importantly, we must stay committed to our education so that one day we may be empowered and have the opportunity to change the world forever.