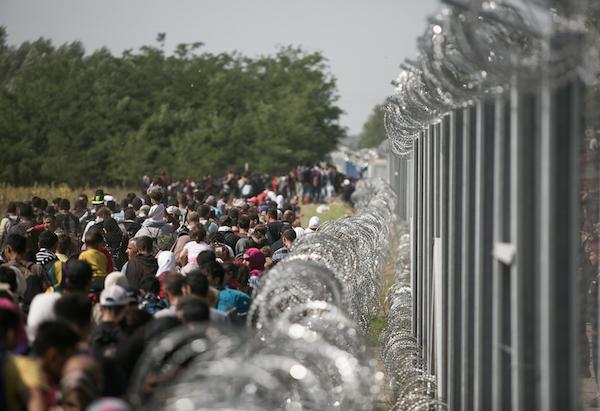 Hundreds of the refugees and migrants along a new fence built by Hungarian authorities.

Immigration has been one of the issues on the front burner of American politics and has now expanded beyond our borders causing serious issues across Europe. Thousands of refugees escaping war and disaster from countries like Asia, Africa, and the Middle East have been flooding into countries across Europe in often dangerous conditions.

Such serious conditions include dangerous weather, diseases, and malnutrition as a result of crossing vast seas and large land masses in the back of boats and cars. These are only a few of the many difficulties that threaten their journey to safety and according to a FoxNews article, at least 2,498 refugees have died or gone missing.

In response to the most recent arrival of refugees from the Middle East, Europe set in place an “emergency” measure to reach out to the 120,000 men, women, and children. In Germany, the trains that connected Germany to Austria were closed for 12 hours and they tightened control on its’ borders. The German government believes that within the year they will receive about 800,000 migrants.  After Germany imposed checks on the German-Austria border, other countries such as Austria, Slovakia, and the Netherlands have implemented border checks of their own.

The issue of immigration stretches beyond men, women, and children crossing the border. More immigrants migrating into European countries means that there will be more mouths to feed and more people to support. Prominent figures across the globe have spoken out about the pressing issue. In regard to taking care of those who are searching for a sanctuary, Pope Francis tweeted:

May every parish and religious community in Europe host a refugee family. #Jubilee #refugeeswelcome

For Presidential candidate Donald Trump, getting asked questions about immigration and reform policies is a common occurrence. When discussing immigration on our home front at one of his rallies, Trump commented that “It’s a massive problem we have to stop illegal immigration,” he explained. “It’s disgusting what is happening to our country, we are a dumping ground for the rest of the world.” He then went on to emphasize America’s need to build a wall and enforce immigration laws to prevent any further immigration conflicts.

Immigration issues have been and always will be a debated national issue. It continues to grow at a larger scale than ever before and has become a pressing issue at an international level. Due to the increasing coverage in the media because of the the 2016 Presidential race, immigration reforms are being pushed across the globe.